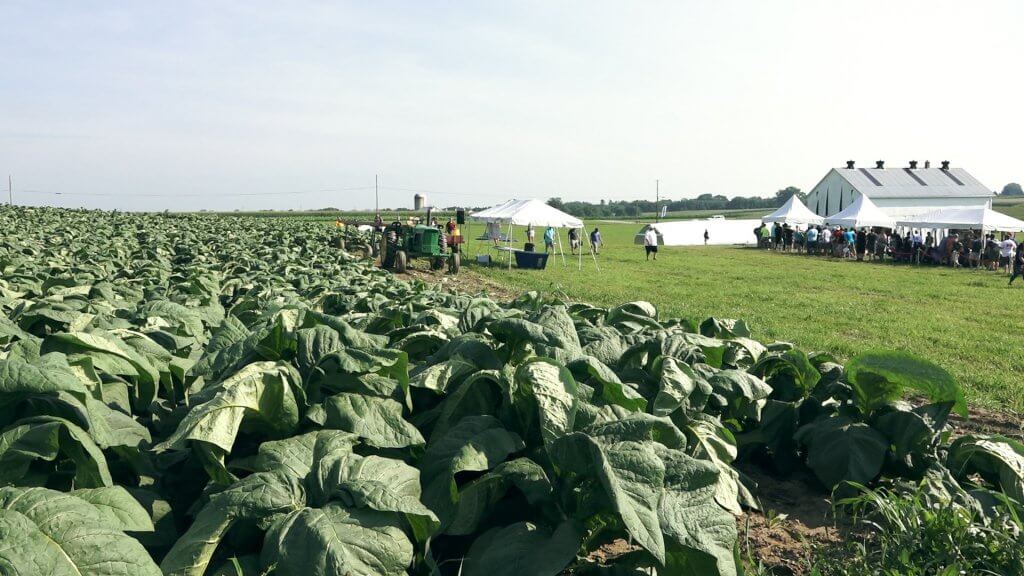 This past weekend, Drew Estate held the 2nd Annual Pennsylvania Barn Smoker in Strasburg, PA on the Stonehurst farm owned by Don and Emily Welk. This farm has been in operation for over 100 years, and grows some of the richest and powerful tobacco in the world, Pennsylvania P-41 Broadleaf.

Attendees arrived at the farm and were greeted by Jonathan Drew, Dirty Fabien, and the entire Drew Estate Family. They received their cigars and brand new Barn Smoker 2.0 swag bags. After a rousing speech from JD, groups were split up to learn the process behind growing, harvesting, curing and blending cigars with this famous Pennsylvania tobacco. A stalk cutting demonstration was given in the fields, and the tobacco was then taken to be hung high in the rafters in the barn.

After the stations, attendees made their way back to the main tent for a catered lunch and to start visiting the various activations. This year at Barn Smoker 2.0, we are featuring major brand activations for cigars not normally featured in the Barn Smoker program. Attendees could play dominos and enjoy a little roast pig at the Herrera Esteli tent, learn how to roll a cigar with Henry Pineda and Michael Giannini at the Undercrown activation, for a little bit of cooler refreshment and an afternoon pick me up they could grab an Iced Coffee and Tabak Especial, and finally for those who want to bust a move, we had the ACID Nightclub rocking in the middle of a farm!

Then the raffles began, with major prizes including multiple Undercrown Mega Standing Ashtrays, a painted Dominos table, and custom corn hole sets. These can only be won at a Barn Smoker and all proceeds went to benefit Cigars for Warriors. All told, we raised over $20,000 to help support Cigars for Warriors in their mission to provide the deployed military with the cigars and little piece of home they need.

Feel free to check out our album of the event and be sure to tag yourself and your friends.