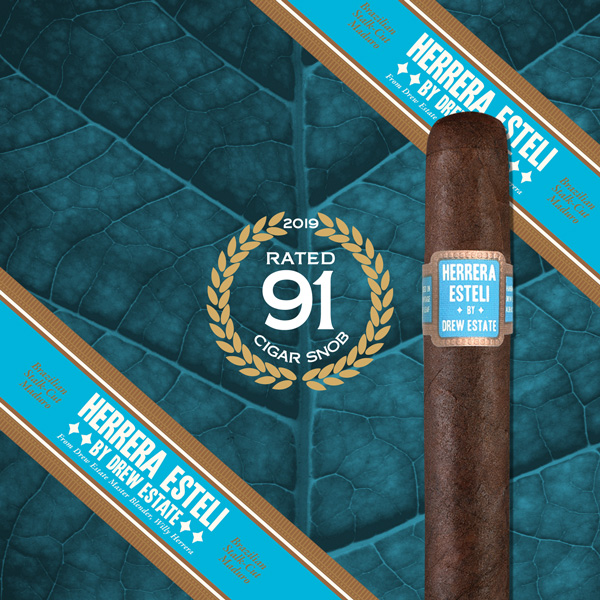 The latest issue of Cigar Snob Magazine has landed and wow, it’s full of great news for our Master Blender Willy Herrera and the whole Drew Estate team!

Kicking things off, the Herrera Esteli Norteno Toro scores a 92, with Cigar Snob noting the cigar, “opens with flavors of cocoa powder, soft pepper and a touch of oak complemented by an aroma of dark roast coffee. This medium strength blend is soft-pressed and covered in an even-colored, dark reddish brown wrapper.”

Next up, the original Herrera Esteli Habano Robusto Grande also lands a whopping 92 rating, where they note this cigar is, “exceptionally balanced and consistently well made, this medium strength smoke delivers a profile of nuts, soft pepper and caramel complemented by a touch of espresso and earth. This cigar produces an excellent smoke output along a perfect draw and burn.”

Finally, the newly released Herrera Esteli Brazilian Maduro Lonsdale Deluxe earns a fantastic rating of 91 with Cigar Snob finds it, “consistently well made and covered with a neatly applied dark, toothy wrapper with excellent oils. Delivers an excellent smoke output with a smooth profile of sweet molasses, earth and soft pepper accompanied by a hint of black coffee.”

Thank you to our friends at Cigar Snob for these amazing reviews and we hope you go out and enjoy the newly repackaged Herrera Esteli brands.