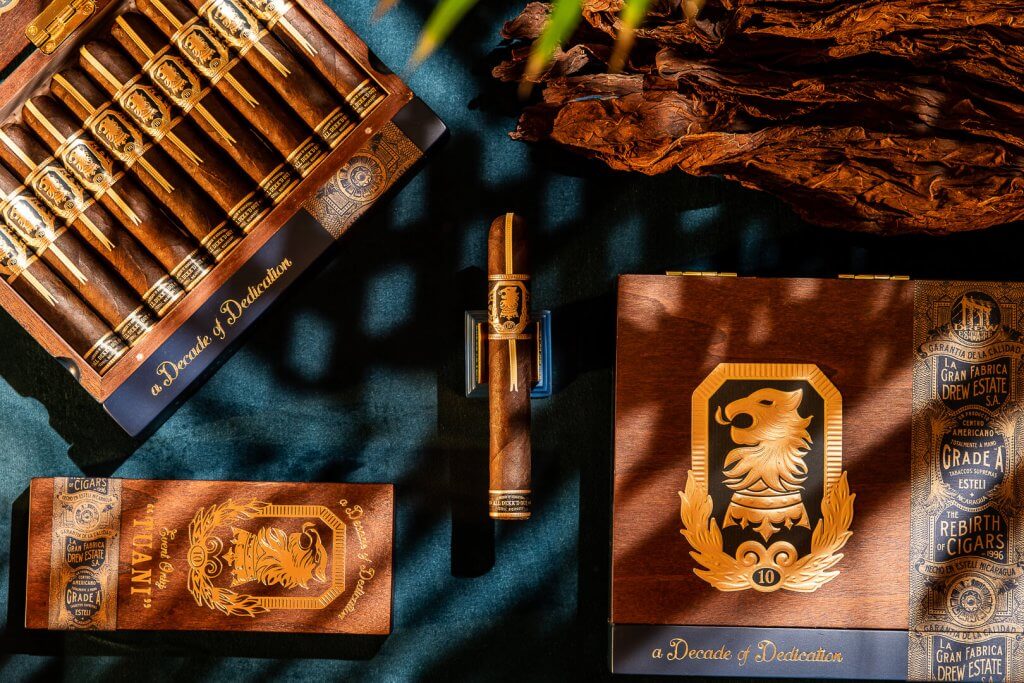 Cigar consumers weren’t the only ones who loved Liga Privada. The very people who made the cigars at La Gran Fabrica Drew Estate in Estelí, Nicaragua, were also big fans. These employees could choose any Drew Estate cigar to enjoy while working at the factory and many of them opted for Liga Privada. Eventually, Drew Estate told its factory staff to stop smoking Liga Privada so that the company could supply more of them to the market.

While Drew Estate’s employees were disappointed, they are resourceful. On their own initiative, they gathered different vintages and primings of the same rare tobaccos used in Liga Privada to create their own signature cigar with a Mexican San Andres Maduro capa. Rather than being a replacement cigar for the Liga Privadas that they could no longer smoke, this cigar stood on its own with excellent smoking qualities and made with uncompromising quality and flavor characteristics that was similar to Liga Privada. After sampling his employees’ grass-roots effort, Drew Estate’s founder, Jonathan Drew, knew that it was a cigar that deserved to be shared with the rest of the world. Thus, the Undercrown brand was born with the launch of Undercrown Maduro.

Pedro Gomez is Drew Estate’s brand ambassador for Undercrown. Nicaraguan to the core, Pedro represents Undercrown cigars at Drew Estate events throughout the United States, and it’s the brand with which he most identifies. Pedro witnessed its creation on the factory floor and feels tremendous pride in Undercrown’s grassroots and blue-collar origin. Pedro explains each of the Undercrown expressions and how each one fits into the entire Undercrown portfolio.

“Undercrown is the brand that most closely identifies Drew Estate’s dedication to Nicaragua and our people,” Pedro says. “The company has always given us so much and it has really supported Undercrown since its creation. We take great pride in the fact that a cigar we essentially created for our own enjoyment is being shared with cigar smokers all over the world. Ten years after the first Undercrown was introduced, the brand has grown to include cigars that please cigar smokers who want a fuller-bodied cigar to those who like mild-bodied cigars. That brand is really like an umbrella that covers everything a cigar smoker could want.”

Drew Estate’s torcedores are the talented people who uphold the company’s uncompromising quality standards without any fanfare. Resourceful, passionate and enterprising, these torcedores are hardworking people who like to relax by enjoying a great cigar just like cigar consumers everywhere. These unheralded artisans take great pride that Drew Estate has been sharing their Undercrown cigars with the rest of the world. The original Undercrown created on the factory floor at La Gran Fabrica Drew Estate, Undercrown Maduro is medium- to full-bodied. Refined and balanced with excellent depth, Undercrown Maduro cigars offer a lush, smooth and creamy taste profile with a natural sweetness.

The second release in the Undercrown line, Undercrown Shade is a collaboration between Drew Estate’s Master Blender, Willy Herrera, and La Gran Fabrica Drew Estate’s Liga Privada blending team who developed Undercrown Maduro. Willy joined Drew Estate in 2011 and he initially focused on creating Drew Estate’s Herrera Estelí line. As the Undercrown Maduro cigar’s popularity grew, Willy challenged the Liga Privada team to create an Undercrown cigar that offered a different flavor profile that used a shade-grown Connecticut capa. After more than a year in development and sampling dozens of potential blends, the Liga Privada blending team created the cigar that exceeded Willy’s demanding expectations. Undercrown Shade is lush and ultra-smooth with a little bit of a kick to differentiate it from most other cigars that use a Connecticut wrapper. A medium-bodied cigar, Undercrown Shade delivers notes of creaminess with hints of vanilla, caramel and pepper.

“It’s not one-dimensional,” Pedro explains. “While the Connecticut capa offers creamy mildness, the Dominican and Sumatra tobaccos really make the spicy and peppery elements shine. Undercrown Shade is a very important product to have in our portfolio because it’s the perfect bridge for people to make the transition from our infused cigars to traditional cigars.”

Drew Estate extended Undercrown’s “Born on the Factory Floor” legacy with the release of its third Undercrown cigar, Undercrown Sun Grown. For years, the company had vainly tried to secure rare Ecuadorean Sumatra wrapper-grade tobacco. After a decade-and-a-half of searching, Drew Estate finally found a reliable source that promised to provide ample supply of the flavorfully rich, aromatic and potent tobacco.

Willy and the Liga Privada blending team worked together once again to craft the blend for Undercrown Sun Grown. With the addition of one extensively aged Ligero leaf from Nicaragua’s Nueva Segovia region to enhance the filler tobacco’s strength, Undercrown Sun Grown is the fullest-bodied cigar in the Undercrown profile but it is still an accessible cigar for less experienced smokers. The complex Undercrown Sun Grown blend offers woody and peppery notes with hints of toffee, cinnamon, creamy butter and toasted nuts.

“Undercrown Sun Grown is a little bit more robust and a little spicier than Undercrown Maduro or Undercrown Shade,” Pedro says. “I’d consider it a medium-plus cigar that’s very much in the everyday smoker’s wheelhouse. It’s the perfect cigar for someone who is used to smoking mild- to medium-bodied cigars and wants to push his or her palate a little more.”

The Undercrown brand draws its spirit from the industrious Nicaraguan employees at La Gran Fabrica Drew Estate who created their own unique cigar, and the essence of Undercrown 10 is “All Dekked Out”—those hardworking Drew Estate employees dressing up for a night of celebration. For Undercrown’s tenth anniversary, Drew Estate’s Liga Privada blending team relied on the company’s vast tobacco inventory and their years of cigarmaking and blending experience to create a truly special cigar. Undercrown 10 debuts in May and the limited Undercrown 10 Factory Floor Edition Lonsdale (6 x 46) will launch in June. The Tuani (6 x 52 Belicoso) Undercrown 10 is an exclusive cigar that’s available only at events that Pedro attends throughout 2021.

“Undercrown 10 is a little bit more of an intense smoke than any of the other Undercrown cigars,” Pedro shares. “It’s got a lot more spice and it’s fuller-bodied, but it’s balanced and very nuanced. It takes you on a journey and transitions a lot with earthy sweetness and waves of black pepper spice with notes of sun-dried cherries, raisins and cacao. Undercrown 10 is the top of the line Undercrown. It’s a great cigar.

“While the blends are the same as Undercrown Maduro and Undercrown Sun Grown, the box-press on both Dojo Dogma cigars slightly intensifies and alters the smoking characteristics,” Pedro explains.

“Like Shady Records in the music business, Shady Undercrown XX is a powerhouse,” Pedro says. “It uses a blend that’s very similar to the Undercrown Maduro Corona Viva. It is full-bodied but smooth and sophisticated. Fans of both Eminem and Drew Estate love the cigar.”