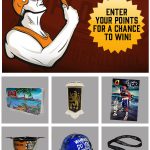 Good afternoon diplomats, it is time to do battle with Monday again! Drew Estate won’t let you go into battle unarmed though, so we are offering up some sweet prizes this week on the Drew Diplomat App. There is a beautiful Natural cigar mold featuring a picturesque island, a Liga Privada Feral Flying Pig Stinky Ashtray and finally an Experience Acid Hard Hat. Do not forget to enter your points for the Liga Privada Unico Mega Standing Ashtray being raffled off at the end of the month. Have a great week diplomats and smoke happy!