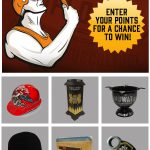 Good afternoon diplomats, how was everyone’s weekend? We had a great weekend here at Drew Estate, and are super excited to share this weeks Drew Diplomat prizes with you! Up for grabs this week we have some unique items including something very rare. First up is a MUWAT stinky ashtray that would look awesome in any cigar cave, next up is a Kentucky Fire Cured hardhat that just shines, and finally we have a Undercrown Sun Grown cigar mold, no one is even supposed to know about these.  Have a good week diplomats!