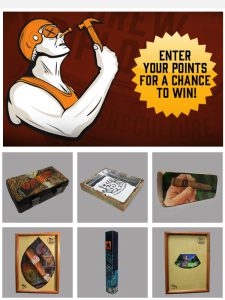 Wow Diplomats, what a crazy few weeks! We are back from IPCPR and we have released some amazing products you will soon find on Drew Diplomat including new Liga Privada, Herrera Esteli, Kentucky Fire Cured and more! It’s Monday and it is time for us to give away some great prizes on Drew Diplomat. Celebrating the Herrera Esteli releases, we have a gorgeous painted tobacco leaf to show off in your cigar lounge! Next, for you Nica Rustica fans we have a travel humidor you are going to want to take with you everywhere. Good luck and have a great week Diplomats!