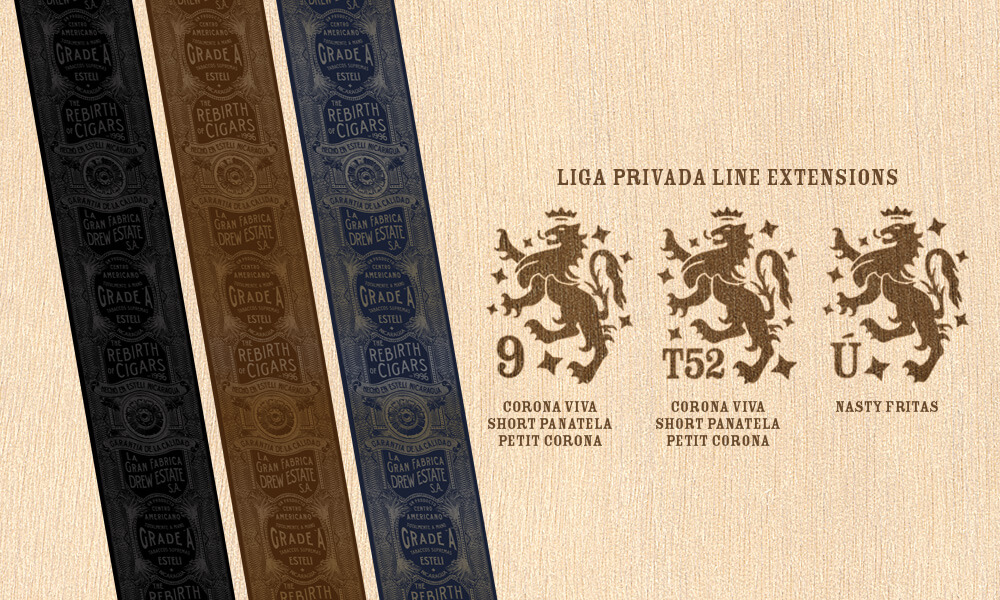 Drew Estate announces the Corona Viva, Short Panatela, and Petit Corona vitola extensions for Liga Privada No. 9 and T52, as well as the Unico Serie Nasty Fritas will be available for Drew Diplomat Retailers. Each of the DDRP releases will be displayed in Drew Estate’s Booth at the IPCPR Convention and Tradeshow held, July 14-17, 2018 in Las Vegas Nevada.

The No. 9 and T52 Corona Viva, Short Panatela, and Petit corona will now be core sizes of the No. 9 and T52 lines, featuring the Liga Connecticut River Valley Broadleaf and Stalk Cut Habano blends, over plantation grown Brazilian Mata Fina binders, and Nicaraguan and Honduran fillers.

The Nasty Fritas utilizes a Connecticut Broadleaf Oscuro wrapper and a plantation grown Brazilian Mata Fina binder over Nicaraguan and Honduran fillers. Like the Papas Fritas, the Nasty Fritas filler tobacco incorporates left over tobacco leaves that are short cut through the manufacture of Liga Privada No. 9 and Liga Privada T52 cigars.

From the Wynwood Safehouse, “We have been vibing on the Nasty Fritas at Cigar Safari. When the Diplomat App came out, the Papas Fritas quickly became a fan favorite with “Papas Fritas Tuesdays” and the Lit Mafia. I was telling a group at Safari about Nacatahuevos, which is my creation of Nacatamale with 2 over easy eggs on top. The group was like that’s the Esteliano version of getting nasty on some French fries. We’ve been enjoying it mostly at Cigar Safari in Nicaragua, but its time to get mega nasty with our homies.”

For full coverage of Liga Privada No. 9, T52, & Unico and all of Drew Estate’s IPCPR national releases check out our 2018 #DEIPCPR promotion at www.drewestate.com/IPCPR. If you are attending IPCPR stop by for a smoke at the Drew Estate Booth (Booth #1814), and a cocktail under the Water Tower curated by John Drew Brands.