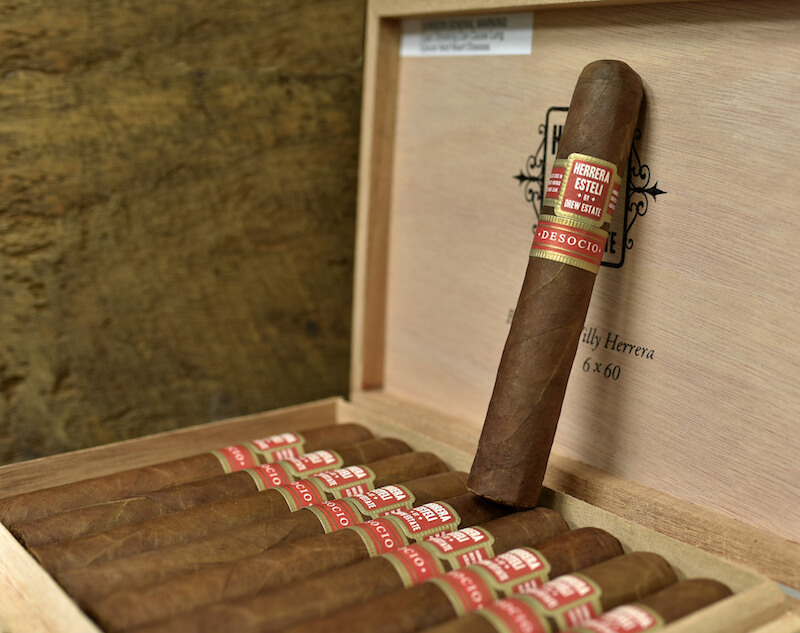 The Herrera Estelí DeSocio is a 6 x 60 vitola featuring an Ecuadorian Habano wrapper, Honduran binder, and filler from Nicaragua, presented in 10 count boxes with an MSRP of $8.60 per cigar. Willy Herrera, Master Blender of Drew Estate stated, “I’ve been asked consistently over the years at events across the nation to blend a larger ring gauge Herrera Estelí. The opportunity and challenge of bringing out the unique set of flavors in a large format cigar took many trials and this DeSocio takes the Herrera Esteli blend and unparalleled smoking experience to a whole new level.”

The DeSocio series was inspired by the maternal grandmother of Tom Sullivan, Founder of Alliance Cigar, and pays homage to the family’s heritage. Tom Sullivan states, “The DeSocio collection of exclusive sizes of my favorite brands is something I’ve always wanted to do, and now with the addition of the Herrera Estelí DeSocio I am excited to finally add a vitola from my favorite Drew Estate brand. My working relationship with Drew Estate began in 1997 and the addition of the Herrera Esteli ‘DeSocio’ helps us mark and celebrate our 20-year anniversary of friendship and mutual business success.”

From Drew Estate Connecticut Barn Smoker, where Jonathan Drew’s theme was “family”, he stated, “The Sullivan family and Alliance Cigar are true friends and for 20 years have been a strategic partner of DE at every level. The Herrera Esteli ‘De Socio’ is a special cigar and beautiful concept which honors family and heritage. Tommy is a tobacco man, who has helped many in the premium cigar manufacturing community grow and better themselves. It’s great to give something of value back to our Brother Sully. I know you are reading this my brother, and I want to personally thank you for 20 years of solidarity and partnership.”

Fans of Herrera Estelí are encouraged to download Drew Diplomat, the official mobile application of Drew Estate, which is now available in the App Store for iPhone®, and iPod Touch® and on Google Play™ for Android™. For more information head to http://drewdiplomat.com

Founded in 1997, Alliance Cigar is a national wholesale distributor focused on all major premium imported cigar brands as well as today’s most sought after boutique brands and limited editions. Alliance Cigar is family owned and operated and is nationally recognized for its unparalleled customer service and loyalty. For more information contact ;Tom Sullivan at purosintl@aol.com p: 800-328-1001 or go to: www.Alliancecigar.com