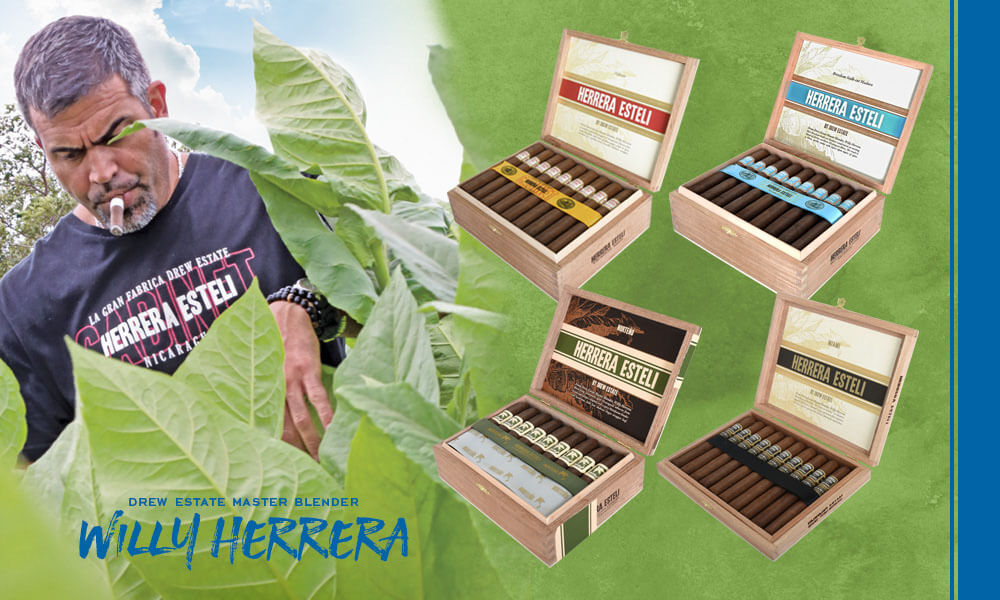 The Herrera Esteli Miami is crafted by level 9 rollers from Cuba at the El Titan de Bronze on Calle Ocho in Little Havana, Miami, – Willy Herrera’s Family Factory and the oldest remaining Fabrica in Little Havana. Like the Short Corona size featured at the 2016 IPCPR Tradeshow, the complete Herrera Esteli Miami line is expertly crafted with a lavish Ecuadorian Habano Oscuro wrapper over a rich Ecuadorian Sumatran binder with select fillers from the Dominican Republic and Nicaragua. The new look of Herrera Esteli Miami features a black and gold color tone and is only available to Drew Diplomat Retailers in the following 5 vitolas:

From Little Havana, Willy Herrera, Master Blender of Drew Estate, “The Herrera Brazilian Maduro is my expression of the floral and earthy Brazilian Mata Fina tobacco. We use it typically as a binder or accent tobacco in the filler but I wanted to showcase its dynamic and unique texture. I really like the black and gold color tone of the Herrera Esteli Miami and how it fits into the brand portfolio with multiple vitola expressions in the Miami blend. Working with my family on this brand takes me back to my blending roots and sincerely excites me.”

The Herrera Esteli Habano and Herrera Esteli Norteno are receiving a new look for IPCPR 2018. Each will be presented in unified Herrera Esteli Branding and will now be packaged in 25 count boxes. Willy Herrera adds, “The uniform packaging for the Herrera Esteli line has elements of classic Cuban inspired branding mixed with modern simplicity. I loved the classic cabinet boxes, but it was time to partner with our retail tobacconists and create a more cohesive space for Herrera fans to find my blends on the shelf.”

We will no longer be supporting the 28 and 75 count refillable display trays or the 25 count refill bundles for tobacconists. Condensing to only 25 count boxes across the entire brand except for our limited production vitolas is really my vision of creating a cohesive brand experience. As we continue to collaborate with fine tobacconists around the country as well with our Tienda Exclusivas, we will also be updating the branding.

For full coverage of Herrera Esteli Brazilian Maduro, Miami and all of Drew Estate’s IPCPR national releases check out our 2018 #DEIPCPR promotion at www.drewestate.com/IPCPR. If you are attending IPCPR stop by for a smoke at the Drew Estate Booth (Booth #1814), and a cocktail under the Water Tower curated by John Drew Brands.