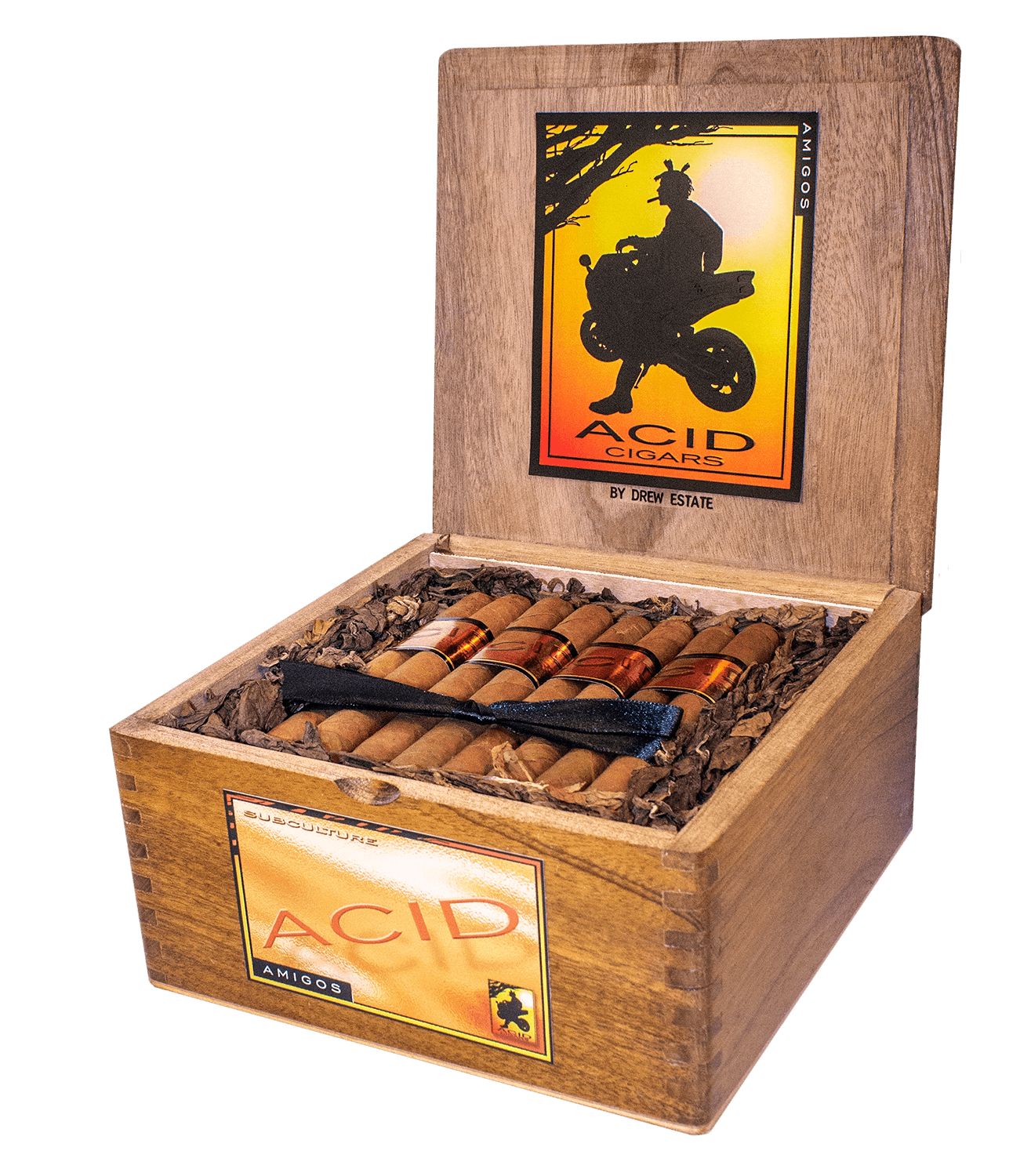 In 2002, Jonathan Drew invited Two Guys Smoke Shop to be part of a small, limited group of retailers with their own unique sizes and blends of ACID cigars, known as Subcultures. The Garofalo Brothers were excited and found in their research that the first Cuban cigar to be sold in Boston, where Two Guys Smoke Shop began their business back in 1985 was a brand called Amigo’s. David Garofalo, President of Two Guys Smoke Shop noted, “Dos Hombres is technically the direct translation of Two Guys. Since cigar enthusiasts are such friendly people, our logic was when you are walking down the street and you got two cigars, if you share one with someone you instantly have a friend, Dos Amigos. We were honored to be one of the first retailers in the country to join the Subculture program, and are proud to continue with our Diplomat Membership.”

ACID Amigos features a Connecticut Shade wrapper, complemented by a blend of premium Nicaraguan fillers with a smooth, sweet, and aromatic infusion. ACID Amigos are 5 x 38 cigars finished with a Pigtail head, and wrapped by two under the same band. Amigos are presented in 40-ct boxes, 20 Amigos of two cigars. Introductory price per box is $159.99 and $9.99 for two sticks.

From his Wynwood Safehouse, Jonathan Drew President and Founder of Drew Estate, “David and the crew at Two Guys are not just amigos of the Subculture Movement, they are friends. This is the store that I personally conducted my third cigar event ever, back in 1996. Two Guys Smoke Shop has a decorated history and is an intrinsic part of New England cigar culture. ACID Amigos is a really bad ass little subculture.”

Look for the Acid Amigos to hit Two Guys Smoker Shop’s shelves and their online shop today, June 11th. There will be a limit of 2 boxes per person and will be sold exclusively at Two Guys Smoke Shop three locations, Salem NH, Seabrook NH and Nashua NH and online at 2GuysCigars.com.

Make sure to follow all of Drew Estate’s news by following on social media at @drewestatecigar. Fans of ACID cigars are encouraged to download Drew Diplomat, the official mobile application of Drew Estate, which is now available in the App Store for iPhone®, and iPod Touch® and on Google Play™ for Android™. For more information head to http://drewdiplomat.com.

Two Guys Smoke Shop has been selling cigars since 1985. That’s when it all started. It was named Two Guys because it was that simple, just two guys (The Garofalo Brothers, David and John) selling cigars. After two years in the business, the company expanded from their location in Everett, Massachusetts to a second location in East Boston. In July 1996, after losing a single-handed battle to fight cigar taxes that were implemented in the state, Two Guys moved North to tax free Salem, New Hampshire.
Today, Two Guys Smoke Shop operates three locations in New Hampshire all off exit 1 on the three major highways leading into the state. The 7,500 square foot Two Guys Smoke Shop, Salem, NH was joined by Two Guys Smoke Shop, Nashua NH and Two Guys Smoke Shop, Seabrook, NH. Additionally, the company has a mail order business located at 2GuysCigars.com where their inventory of more than 1 million cigars, cutters, lighters and humidors are available for your shopping 24/7 – 365 Days a Year.