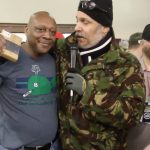 Drew Estate CIGARfest 2017: Down for Dogma

We here are Drew Estate care about our fans fitness. So much so that some lucky guys had an opportunity to do a little contest, so we asked are they #DownForDogma? These ultra rare cigars were released back in 2014, and we broke into our stash down here in Miami just for you! We started off with Drew Estate Stone setting the pace and you can see the rest below. We had a blast, hope you enjoy!