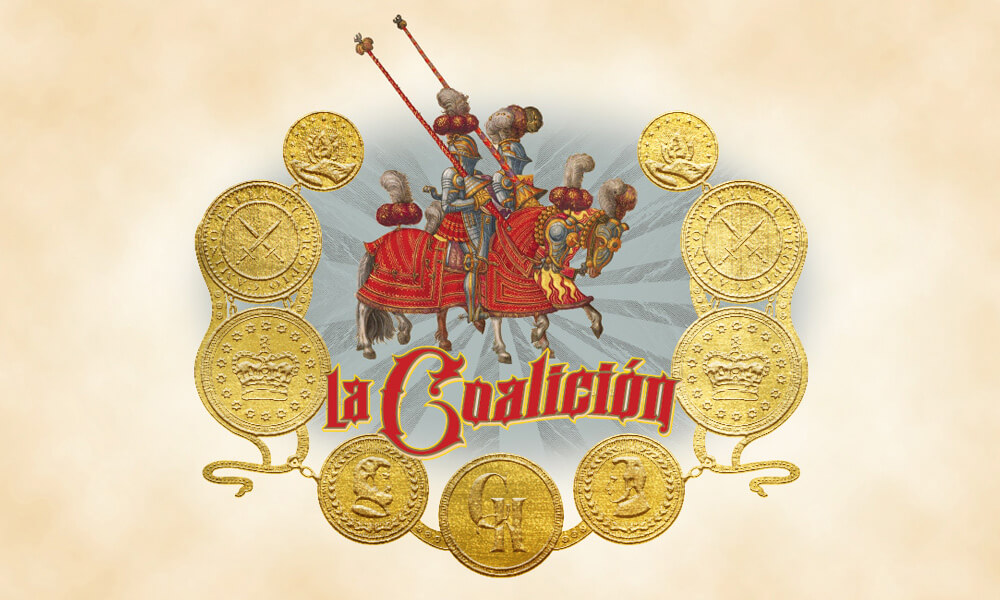 “La Coalicion” is a spectacular collaboration brand for the premium cigar fanatic. The brand is wrapped in rich, dark Connecticut Broadleaf, with a spicy Sumatran binder and aged fillers from Nicaragua and the Dominican Republic. “La Coalicion” is available in 4 sizes:  Corona Gorda (5” x 46), Gordito (5 1/2” x 50), Siglo (6” x 52) and Sublime (6 1/2” x 54). Each vitola brings a very specific and unique nuance and complexity, carefully blended by Willy Herrera and Jon Huber.

From Little Havana in Miami, Willy Herrera Master Blender at Drew Estate highlights, “Huber and I have always had a similar palate for what notes we are looking for in our blends. Working together, we knew from the beginning we wanted to utilize the dense, oily Connecticut Broadleaf wrapper which is the inspiration for this killer smoke.  La Coalicion is a passion product that Huber and I are really proud of.”

From Crowned Heads HQ in Nashville, Jon Huber adds, “I’ve personally wanted to work with Willy for years now, as I feel that our aesthetic towards cigars are similar and we also share a common respect and passion towards the tradition of premium cigars.  Further, being able to tap into the creative juggernaut that is Drew Estate has been an amazing experience.  I’ve long respected what the DE brand has achieved, and I believe their personal brand extends far beyond just ‘cigars;’ they’re truly an innovator, disruptor, and a game changer within our industry.”

From the Wynwood Safehouse, Jonathan Drew President and Founder of Drew Estate notes, “I am proud to report that Drew Estate always remains “Boutique in the Heart” in everything we create. This collaboration with Crowned Heads has been gratifying, mostly because of their passion and intensity. Plus, their hat game is on point!”

“La Coalicion” is manufactured at La Gran Fabrica Drew Estate and is sold through Crowned Heads. It will be shipping in October in the following vitolas:

For full coverage of “La Coalicion” and all of Drew Estate’s IPCPR national releases check out our 2019 #DEIPCPR promotion at www.drewestate.com/IPCPR. If you are attending IPCPR stop by for a smoke at the Drew Estate Booth (Booth #3213), and a crafted ACID cocktail under the Water Tower.

Join the Brotherhood with Drew Estate and BOTL
The Number One Nicaraguan Cigar to the World is Now Available. Número Uno: A Taste of Diplomatic Privilege