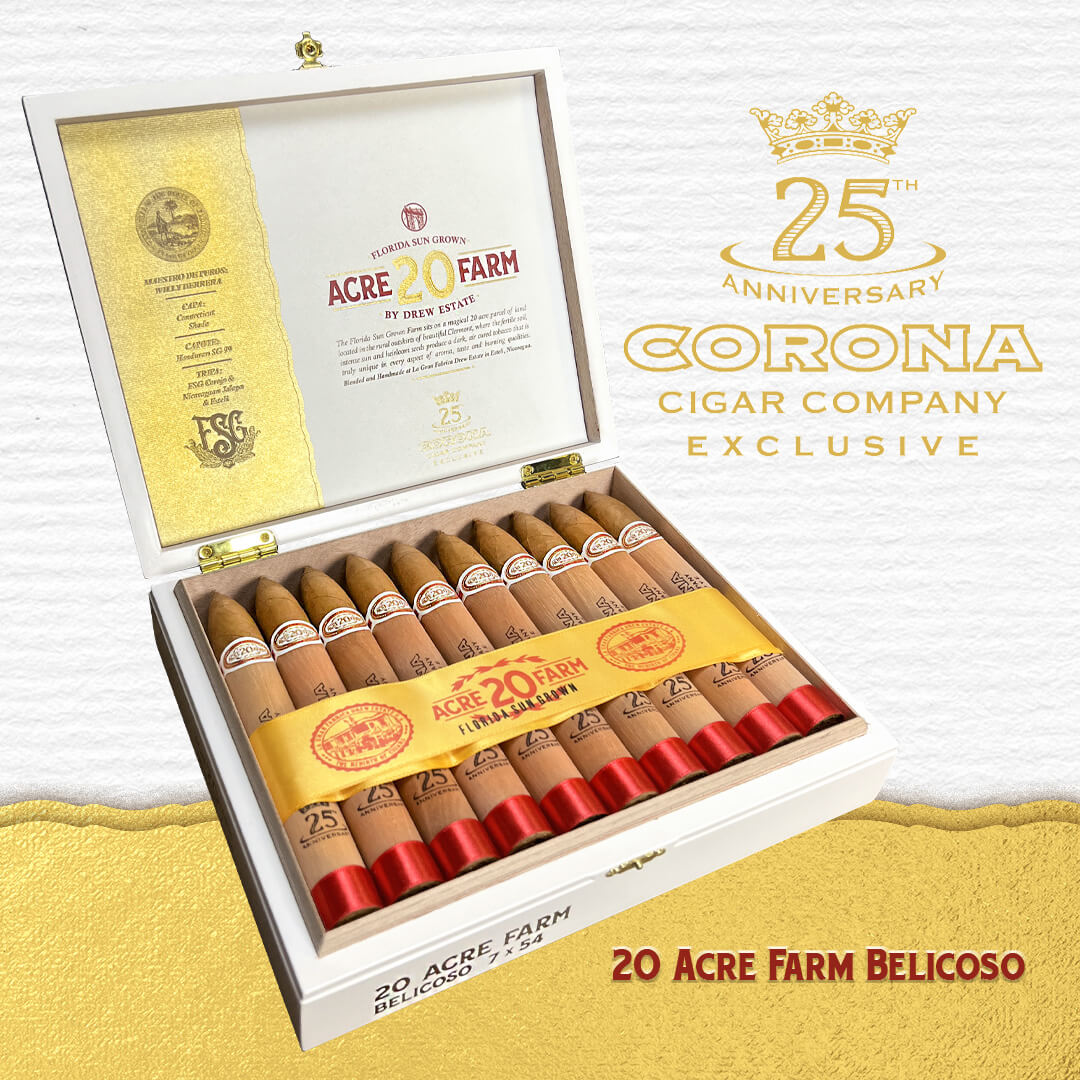 Corona Cigar Co.’s owner, Jeff Borysiewicz, is also a tobacco farmer who singlehandedly revived cigar tobacco growing in Florida … one harvest at a time … on his pristine 20-acre plot of land near Orlando. Jeff dubbed his tobacco “Florida Sun Grown,” and this opulent and majestic leaf takes center stage in Drew Estate’s 20 Acre Farm cigars. Complex and medium-bodied, 20 Acre Farm is crafted with a velvety Ecuadorian Connecticut Shade Grown wrapper, a Sun Grown Habano binder, and a filler blend of Nicaraguan tobaccos from Estelí and Jalapa, coupled with Florida Sun Grown leaf to produce a cigar with super oaky and cedary notes along with a whisper of white pepper and a hint of citrus.

“My farm team and I worked years to massage the soil to produce a tobacco that’s flavorful, intense and aromatic,” Jeff says. “The hard work has been rewarded by Drew Estate showcasing Florida Sun Grown tobacco as a key component in its 20 Acre Farms cigars. I’m very proud that it chose to make the Belicoso vitola exclusively for Corona Cigar Co.’s 25th Anniversary. Our customers can join our 25th Anniversary celebration by enjoying 20 Acre Farm in a format that accentuates the cigar’s sophisticated smoking characteristics.”

“20 Acre Farm is a milestone achievement in Drew Estate’s history,” adds Drew Estate Founder and President, Jonathan Drew. “This ultra-premium cigar pays homage to the famed Cuban cigars of yesteryear as well as Florida’s cigar and tobacco heritage. This very special Belicoso is our strong statement of love and support for what Jeff, Tanya, and Team have achieved, and for their contributions to the premium cigar industry. I look forward to being at the farm with you lunatics during Barn Smoker in May. Gonna be amped.”