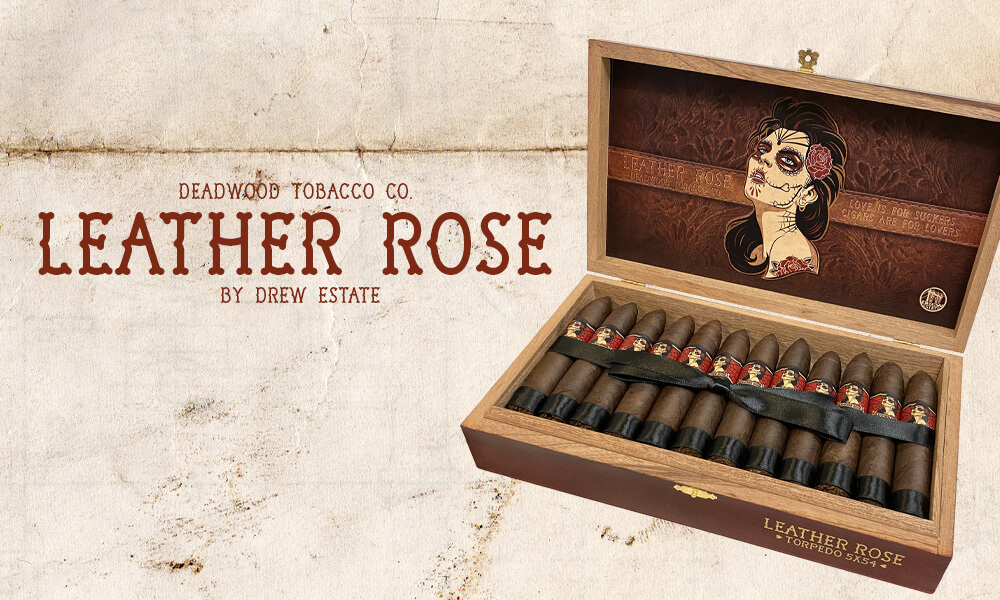 Drew Estate launches the latest addition to the Deadwood lineup, “Leather Rose,” to all retailers nationwide. This release was showcased on Freestyle Live: Special Edition hosted on facebook.com/drewestatecigar June 11th.

Uniting with her sisters Sweet Jane, Fat Bottom Betty, and Crazy Alice after spending time away robbing banks (as the folklore goes) the spicy “Leather Rose” is the boldest lady of the bunch. This 5” x 54 torpedo features a rich maduro wrapper and proves to be the spiciest of the Deadwood family.  Lighting up the Leather rose will fill the room with her exotic aroma, plus the effortless draw will leave you longing for more.

From the Wynwood Safehouse, Jonathan Drew Founder and President of Drew Estate exclaims, “The “story behind the story” of the Deadwood brand begins with one of Drew Estate’s oldest accounts, formerly owned by Miss Vaughn Boyd of Deadwood Tobacco Company.  Miss Vaughn collaborated with us to create the concept, beginning with the notorious Sweet Jane.  The early adopters were the C.A.T.S and “Cigars for Warriors” communities, but from there the brand continued to grow exponentially … and is a juggernaut at this point.  Deadwood fans around the world, it’s time to fall in love with Leather Rose.  She’s simply bad to the bone.”

For full coverage of Deadwood Leather Rose and all of Drew Estate’s upcoming national releases, check out our 2020 #DESummerTakeover promotion at www.drewestate.com/summertakeover and in case you missed it, tune in to Freestyle Live: Special Edition hosted on facebook.com/drewestatecigar.