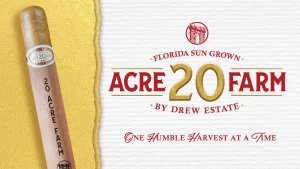 A complex and medium-bodied cigar with super oaky and cedary notes accompanied by a whisper of white pepper and a bright hint of citrus, 20 Acre Farm is built using a velvety Ecuadorian Connecticut Shade Grown wrapper, a Sun Grown Habano binder, and a filler blend of Nicaraguan tobaccos from Estelí and Jalapa blended with the opulent and majestic Florida Sun Grown leaf, which is humbly and lovingly grown one harvest at a time by Jeff Borysiewicz on a pristine 20-acre plot of land near the Central Florida town of Clermont.

A daring entrepreneur who established Corona Cigar Co. in 1996, Borysiewicz began cultivating tobacco on his small farm in 2013 with the hopes of reviving The Sunshine State’s historic legacy of cigar tobacco growing, which had ended in 1977.

“Florida was once a big tobacco supplier for cigar factories in Tampa and beyond,” Jeff explains. “The farm that I bought just west of Orlando proved to be the perfect plot of land to resurrect Florida’s cigar tobacco growing heritage. We combined age-old tobacco growing practices along with the most advanced modern agricultural techniques to produce Florida Sun Grown tobacco, which is unique in every aspect of flavor, intensity and aroma.”

The Florida Sun Grown tobacco has proved to be so unique, in fact, that it has been used previously in other cigar brands and it now takes center stage in Drew Estate’s 20 Acre Farm.

“Jeff’s magnificent farm in Clermont has the feel of being directly transported from Cuba’s famed Vuelta Abajo region, where the best Cuban tobaccos are harvested,” Jonathan Drew, Founder and President of Drew Estate, comments. “While carefully blended into the cigar so it doesn’t overpower the rest of the tobaccos, the Florida Sun Grown tobacco serves as 20 Acre Farm’s backbone, and it leads every aficionado on an exclusive journey thru history, space and time to the gilded years of Cuban cigars.”