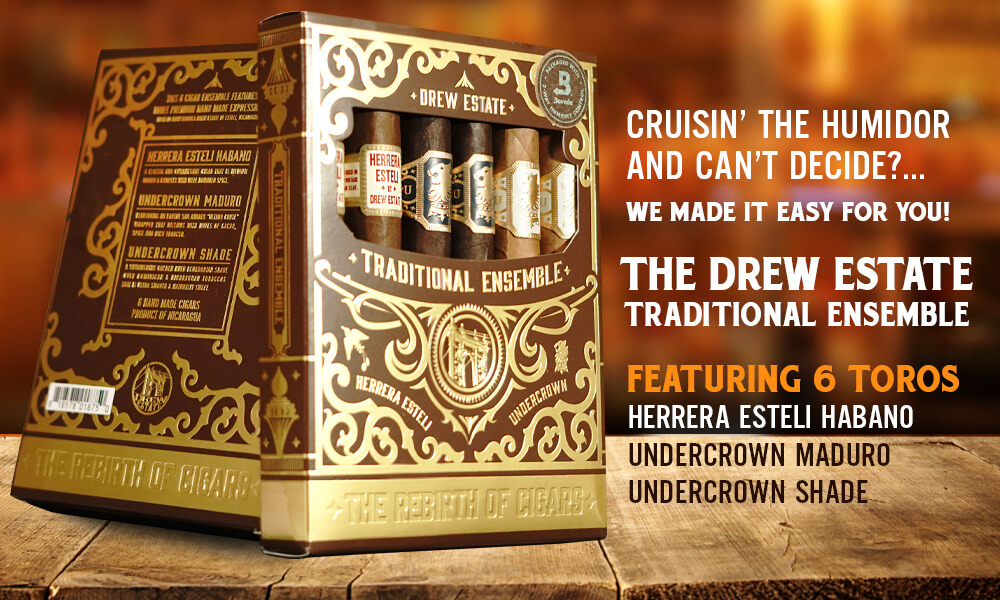 Born on the factory floor at La Gran Fabrica Drew Estate in Estelí, Nicaragua, the Undercrown brand represents DE’s pride in the talent and commitment of our cigar rolling torcedor team who, in a legendary moment of inspiration, created the first Undercrown cigar for their own smoking pleasure … and it is they who have blended each of the Undercrown offerings since.

Undercrown Maduro is the original Undercrown expression, using an Otapan Negro Último Corte (San Andres, Mexico) capa, a T52 Connecticut River Valley Stalk-Cut Habano capote, and a tripa filler blend of Select Brazilian Mata Fina and Nicaraguan Cuban Seed tobaccos to offer a medium- to full-bodied cigar that is lush, smooth and creamy with a natural sweetness. Undercrown Shade is blanketed with an Ecuadorean Connecticut capa, Ecuadorean Sumatra capote, and tripa blend of Dominican and Nicaraguan Criollo ’98 and Nicaraguan Corojo ’99 tobaccos. Shade delivers creamy notes with hints of vanilla, caramel and pepper, and is more robust than most other cigars that utilize Connecticut-seed shade-grown wrappers.

From the Wynwood Safehouse, Jonathan Drew, Founder and President exclaims, “This is a nice little goodie, geared as a trade pickup for our beloved Retailers who need the perfect snag-item for on-the-run-eatin’ individuals who pop into the cigar shop and bounce. Please note the NORE quote, ya’ll.”

The 6-cigar Traditional Sampler Petaca and all of Drew Estate’s #DEBonanzaTakeover releases can be found at www.drewestate.com/de-bonanza-takeover