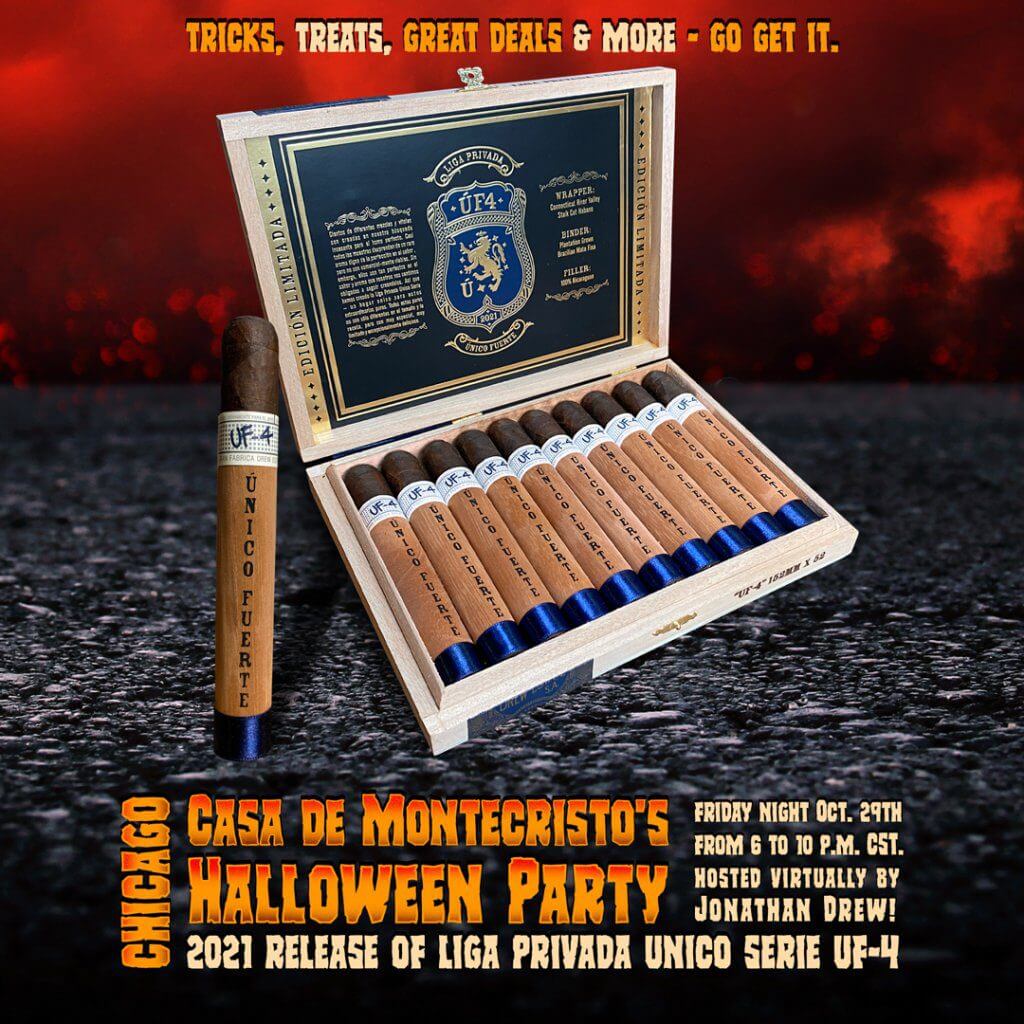 Every year since 2010, Casa de Montecristo in Countryside, Illinois, has been the exclusive home to Drew Estate’s annual limited-edition release of Liga Privada Unico UF4. The 2021 UF4 will premier at Casa de Montecristo’s Halloween Party on Oct. 29 from 6 to 10 p.m. Central Standard Time. The event will be hosted virtually by Jonathan Drew, Drew Estate’s Founder and President.

Liga Privada Unico UF4 was created as Drew Estate developed the blend for Liga Privada T52 in 2008/2009. Searching for an “Ultra Fuerte” Liga, the UF4 blend was called “Liga Privada Blend #4” on the production floor but was passed up in the final round of blend selection, and the current T52 blend was ultimately selected.

“I remember it like it was yesterday,” exclaims Jonathan. “I was in Chicago visiting the fellas, Mike and Sam at Casa, and asked them for their opinion on this 6 x 52 berserker while we sat at the lounge downstairs. They were like, ‘Yo, JD, this is blah blah blah,’ acting in all sorts of ways, all animated and shit. I like those dudes a lot and I wanted to make ‘em happy. Turns out, our decision was a nightmare for the first few years … as we had to change the name various times from JD4 to MF4 and finally to UF4. One of those changes required a mega-urgent band change in Miami, so the Padron family allowed me to work with a few of their packaging people at the last minute to remove the MF4 bands and place the UF4 bands. Welcome to my life, passion and torture. The stick is now a classic, and it’s definitely one of our proudest commemoratives.”

Previously available in 10-Count Soft Packs, the 2021 limited-edition Liga Privada Unico UF4 will be sold in 10-count wooden boxes. Each individual cigar will be wrapped in cedar and will also feature a ribbon around the foot. The cigars will debut during Casa de Montecristo’s annual Halloween Costume Party on Oct. 29, which Jonathan will host virtually. The event will include dinner, a UF4 cigar, special deals and unique swag. Those coming to the event dressed in a costume will be eligible for an additional exclusive deal and may also win prizes. Tickets to the event cost $50.