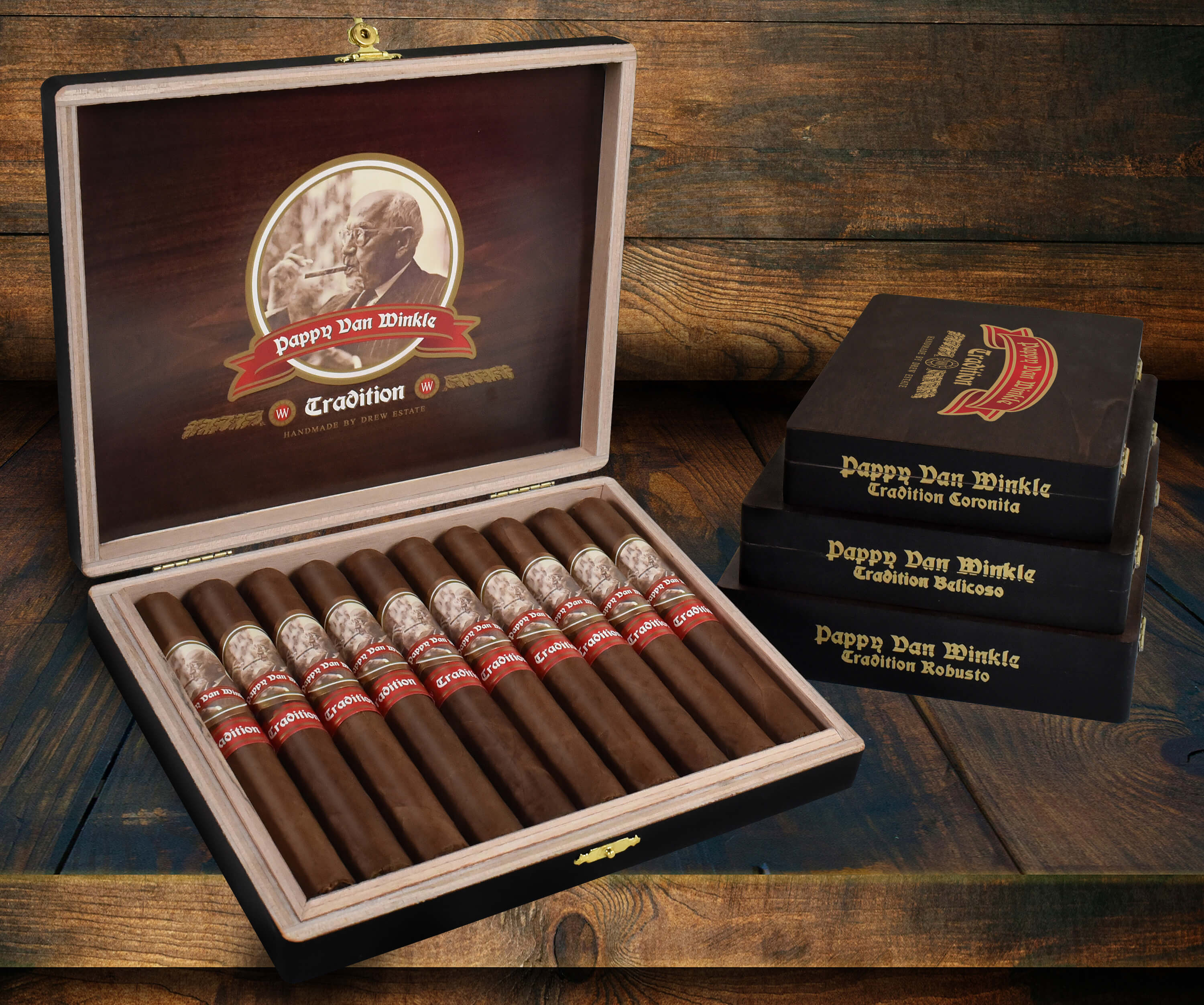 Drew Estate announces today that it is shipping the annual release of the Pappy Van Winkle Tradition to Drew Diplomat Retailers nationwide.

Drew Estate is honored to represent the Van Winkle Family with an ultra-premium cigar that reinforces the legacy of America’s true living icons, Julian Van Winkle. The Pappy Van Winkle Tradition features an Ecuadorian Habano Oscuro wrapper, Indonesian Binder and aged fillers from Nicaragua and the Dominican Republic. The 2018 release features cigars that have been aged one additional year to provide added nuance and complexity for cigar enthusiasts.

From the Wynwood Safehouse, President and Founder of Drew Estate, Jonathan Drew notes,” The Pappy Van Winkle Tradition is an ultra-complex cigar that honors the history and craftsmanship of the Pappy Van Winkle bourbon. We chose to age these cigars an additional year for this release, as Willy Herrera wanted to amplify the smoothness.”

The Pappy Van Winkle Tradition is presented in the following expressions:

The Pappy Van Winkle Tradition will begin shipping in October in coordination with when Old Rip Van Winkle releases their annual batch of the highly sought-after Bourbon and Rye.

The Old Rip Van Winkle Distillery has a four generation history. The Van Winkle family’s involvement in the bourbon industry began in the late 1800s with Julian P. “Pappy” Van Winkle, Sr. He was a traveling salesman for the W.L. Weller and Sons wholesale house in Louisville. Pappy and a friend, Alex Farnsley, eventually bought the wholesale house and also partnered with Mr. A. Ph. Stitzel on the purchase of Mr. Sitzel’s distillery. The three of them merged the two companies and became the Stitzel-Weller Distillery.

In May of 1935 at the age of 61, Pappy opened the newly completed Stitzel-Weller Distillery in South Louisville. Its prominent brands were W.L. Weller, Old Fitzgerald, Rebel Yell, and Cabin Still. Pappy had a heavy influence on the operations there until his death at the age of 91. His son, Julian, Jr. took over operations until he was forced by stockholders to sell the distillery in 1972. The rights to all of their brands were sold to Norton Simon, Inc. Later, United Distillers, who eventually ended up with the Stitzel-Weller Distillery, sold off all of the original labels around 1999.

After selling the distillery, Julian Jr. resurrected a pre-Prohibition label, the only one to which the Van Winkles kept the rights, called Old Rip Van Winkle. He used whiskey stocks from the old distillery to supply his brand. Julian Jr.’s son, Julian, III took over in 1981 when Julian, Jr. passed away. Julian III has continued with the Van Winkle tradition of producing high-quality wheated bourbon. His son, Preston, joined the company in 2001 and the Van Winkles look to continue that tradition for generations to come.