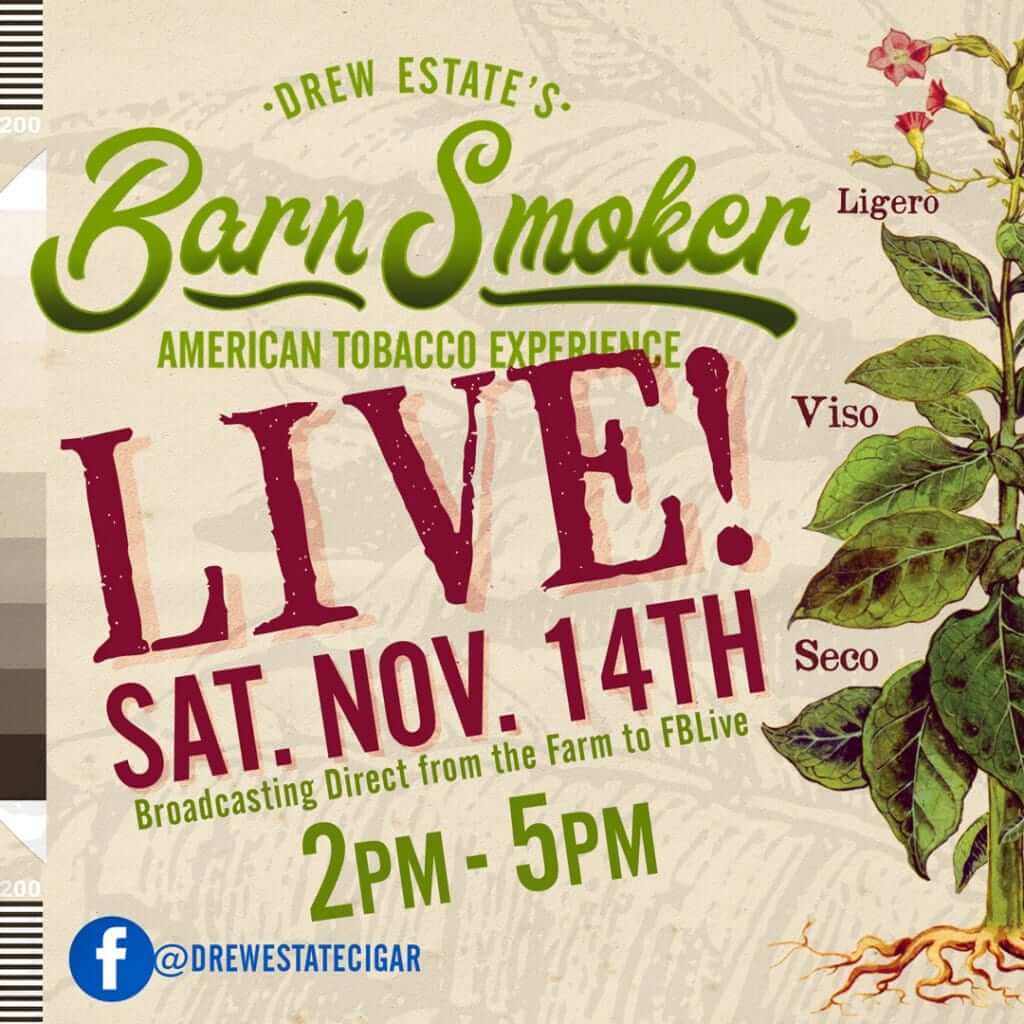 Drew Estate to donate $50,000 to Operation: Cigars for Warriors during its virtual Barn Smoker Live event on Nov. 14

Drew Estate announces today that it will donate $50,000 to Operation: Cigars for Warriors (CFW) during its virtual Barn Smoker Live event, which will broadcast directly from the Florida Sun Grown farm in Clermont, Fla., on Drew Estate’s Facebook page (facebook.com/drewestatecigar) on Nov. 14, from 2 p.m. to 5 p.m.

Due to COVID-19, Drew Estate cancelled the five Barn Smoker events that had been planned for 2020 in Connecticut, Kentucky, Pennsylvania, Louisiana and Florida. Instead, Drew Estate decided to Bring the Barn to the People, announcing its Barn Smoker Good Will Act, through which Drew Estate fully refunded all Barn Smoker ticketholders, sent each of these ticketholders all the incredible swag they would have otherwise received at the in-person events, and decided to showcase a virtual Barn Smoker open to all adults free of charge.

In 2014, Drew Estate hosted its first Barn Smoker at Hopkinsville, Ky. The event brought premium cigar consumers onto a real American tobacco farm and educated them on how the dark fire-cured tobacco used in the company’s Kentucky Fire-Cured cigars is grown, processed and finished. The event, which included local cuisine and spirits samplings proved so popular that the company has expanded its Barn Smoker program to a total of five annual events.

Jonathan Drew, founder and president of Drew Estate, notes, “I kinda view life as a great big mosaic of stories. As a tobacco man, I love the deep, raw, emotional and authentic stories of real American tobacco farmers and families. One of our goals at Barn Smoker is to immerse our DE family into farm life and premium leaf culture. This year, we have a virtual spin on things, but the team is hard at work loading in super duper surprises and cool shit. I have to say that most of all, I’m just lookin’ forward to chillin’ with you guys. Much love!”

A hallmark of each Barn Smoker has been assisting CFW, a 501(c)(3) charity that has shipped approximately 1.2 million cigars to deployed troops and has also provided them with boutique coffee, cigar accessories and other items. Drew Estate’s association with CFW dates to before the charity’s establishment in 2012 when Drew met CFW’s CEO, Storm Boen, and provided legal advice on how to set up a charity.

“Drew Estate has been our biggest supporter and J.D. [Jonathan Drew] has always been a big proponent of ours,” Boen says. “His legal background provided the foundation for Operation: Cigars for Warriors. Since then, he’s ensured that we are at all of Drew Estate’s Barn Smokers, which has helped us a lot, especially after 2016 when the FDA declared that manufacturers couldn’t donate cigars to troops anymore.”

Prior to 2016, Drew Estate had donated more than 150,000 cigars and has also donated approximately $250,000 to the charity to date. While the FDA now prohibits cigar companies from donating cigars to charitable causes, it still allows cigar companies to donate money to charities. A portion of each Barn Smoker ticket sold supports CFW, and Drew Estate also donates raffle items to raise additional money for the CFW at every Barn Smoker event. Despite not holding in-person Barn Smokers in 2020, Drew Estate will add another $50,000 to its charitable contributions to CFW on November 14th.

“While Covid-19 has seriously impacted all of us, it has had a tremendous effect on charitable contributions worldwide, but the missions these charities serve have not diminished,” says Drew Estate CEO, Glenn Wolfson. “In the face of tremendous challenges brought on by the pandemic, Cigars for Warriors continues to successfully fulfill its mission of sending deployed soldiers and sailors cigars and other much needed items they request. With gratitude to these brave men and women serving overseas, Drew Estate is proud to support Cigars for Warriors and we encourage everyone to consider donating their cigars, time or money to this worthwhile charity.”