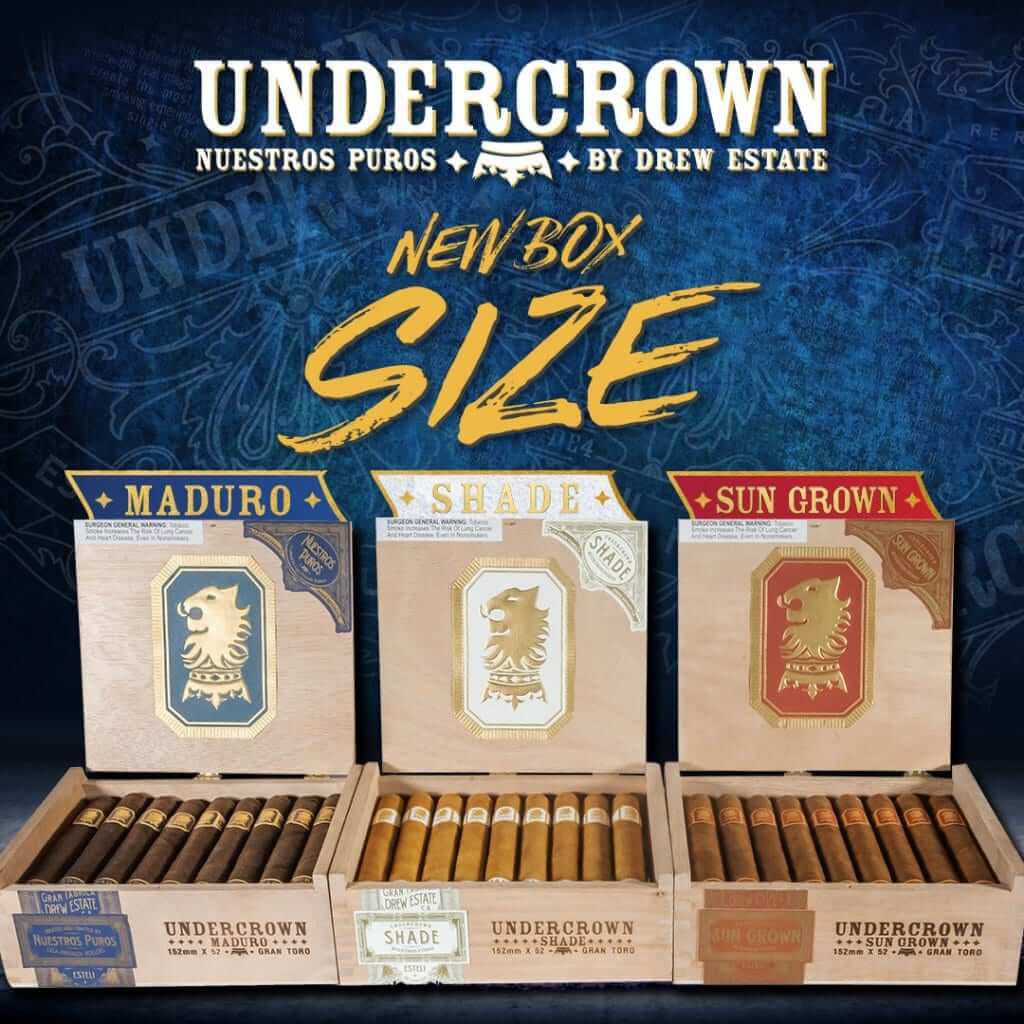 The new box design looks almost identical to the award-winning current design and the boxes continue to contain 25 cigars. The major difference and improvement lies in their shelf-friendly, more compact format, which enables premium cigar retailers to stock more boxes and cigars inside their humidors.  The new boxes will roll out for all Undercrown lines, including Maduro, Shade and Sun Grown, while the boxes for Flying Pig, Tubo and Corona Pequeña will remain unchanged. Additionally, the UPC codes for all Undercrown boxes and single cigars will be unaffected.

Finally, and most importantly, all these classic Undercrown blends will remain unchanged.

“Undercrown’s authenticity amplifies the heart and spirit of Drew Estate,” says Jonathan Drew, founder and president of Drew Estate. “Since we first launched Undercrown a decade ago, the narrative has been consistent, telling the fiery story of ‘who we are’ from a behind-the-scenes standpoint. The Undercrown brandmark and ideology bears witness to our love for Estelí and the enthusiastic and gifted people who work so devotedly at La Gran Fabrica Drew Estate. Undercrown is all about their creative ingenuity and their fearless quest for self-expression—so we will never ever change this historic and meaningful blend.”

A decade ago, when the staff at our factory realized they had to reduce their consumption of Liga Privada No. 9 cigars because we couldn’t keep up with demand, these hardworking men and women took it upon themselves to create their own signature cigar to enjoy. Constructed with many of the same rare tobaccos in the capote and tripa blends as found in Liga Privada, the grass roots Undercrown cigar brand debuted with a Mexican San Andres Negro capa. Since then, the brand has expanded to include: Maduro, with an Otapan Negro Último Corte capa; Shade, which uses an Ecuadorian Connecticut shade-grown capa; and Sun Grown, which utilizes a sun-grown Sumatra capa cultivated in Ecuador.

The new packaging for Undercrown Shade and Maduro are shipping now, with Undercrown Sun Grown shipping in a phased rollout over the next several months.