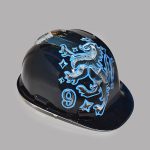 Good afternoon Diplomats, it’s been a busy week here at Drew Estate! We launched Cigar Safari on Wednesday, and are mostly sold out! There are currently 2 spots left so if you were on the fence, act now!

Now onto the thing you were most excited for this week, the Drew Diplomat prizes! We had some great prizes this week including a Kentucky Fire Cured cigar mold, a beautiful Florida Sun Grown stinky ashtray and an electric Liga Privada Hard Hat.