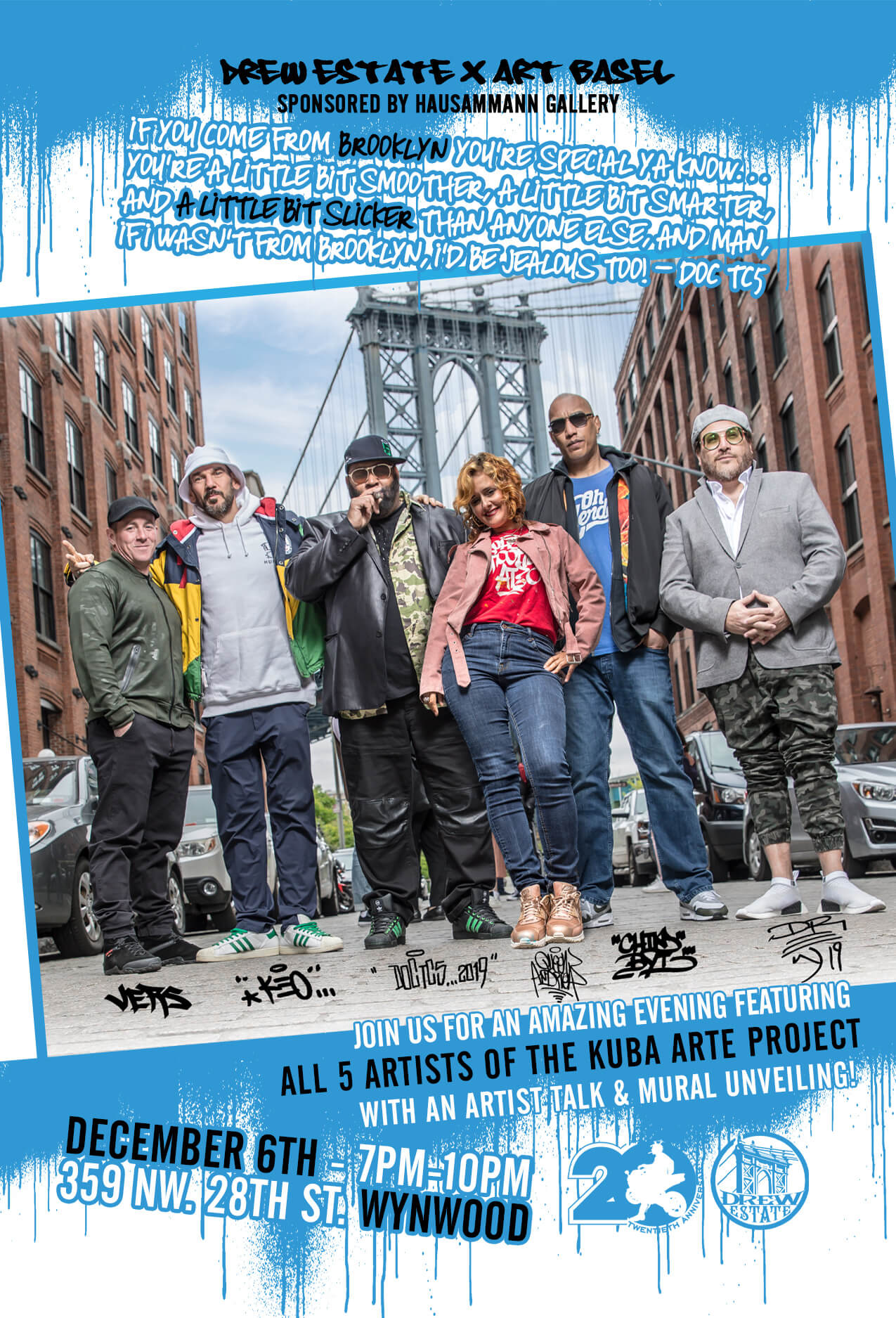 Join Drew Estate for a special 1 night only event in the heart of Art Basel sponsored by Hausammann Gallery, cap-stoning the 20th Anniversary of ACID Cigars and the Kuba Arte project. This premiere event will celebrate the 5 legendary artists behind the Kuba Arte Water Towers featuring a grand mural unveiling, artist talk, gallery showing and outdoor cigar lounge. Click here to grab your FREE or VIP Tickets.

The event is from 7pm-10pm and located at:

Included in your VIP Admission is admission to the event and 1 limited edition Kuba Arte Water Tower featuring a design by one of the 5 artists and 20 limited edition cigars. Designs available will be based on supply.

To commemorate 20 years of ACID CIGARS Drew Estate partnered with five legendary graffiti artists from Brooklyn, NY. The only guidance we provided the artists was that each piece needs to proudly proclaim, “THIS IS OUR NEW YORK ACCENT!”

CHINO; one of the foremost practitioners and ambassadors of graffiti culture in the world, David “Chino” Villorente spent eleven-years as editor of the “Graf Flix” feature in The Source magazine which cemented his position as an important arbiter within the global graffiti community. He has coauthored numerous books on graffiti culture, most recently with The ABC’s of Style (Testify Books, 2018) as well as being an artistic collaborator with brands including, NIKE, REDBULL, ADIDAS, MASS APPEAL, Vh1 as well as co-curating the groundbreaking Beyond the Streets exhibitions in Los Angeles and New York. Villorente currently resides in his native borough, beautiful Brooklyn, New York. IG: @chinobyi.

DOC; A living, breathing legend and the very personification of Brooklyn. DOC worked the Moving Art Galleries (a.k.a. the NYC Transit System) at the dawn of street writing culture where his mission to ask “Who is Doc?” catapulted him to global recognition. IG:@DOCTC5.

QUEEN ANDREA; a NYC-based fine artist, graffiti artist, typographer and graphic designer & is a leader in the newer generation of early 1990’s graffiti writers. Queen Andrea finds her creative inspiration in the diversity & crazy energy of city life and especially graffiti. Out in the streets Queen Andrea has developed a reputation for her oversized typography murals, influenced by an endless appreciation of typography, as well as themes of urban life, hip hop lyrics & empowerment. @queenandreaone

VERS; Born and still based in Brooklyn, where for over 30 years with a spray-can in his hand, Vers has created unforgettable murals in his signature technical style full of energy and movement. His work is known around the globe from Iceland, Europe, Japan & even Mongolia! But NYC will always be home. IG:@VERS718.