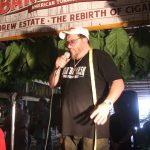 Wow, what a truly amazing day we had at the Florida Sun Grown Farm for the Florida Barn Smoker by Drew Estate. Music was blasting, and knowledge about the American Tobacco Experience was being dropped by Jeff Borysiewicz, Willy Herrera and of course Jonathan Drew.

We went live during the event, covering two of the stations. From Seed to Field with Jeff Borysiewicz and Pedro Gomez and Florida Sun Grown Blending Seminar with Willy Herrera and Henry Pineda

In addition, we raffled off a bunch of amazing Subculture Studio’s custom items including 2 Mega Standing Ashtrays benefiting Cigars for Warriors. Between the raffle and a portion of the ticket sales donated by Drew Estate, we raised over $11,500 for Cigars for Warriors.

We here are Drew Estate support the rebirth of Florida Tobacco and our partnership with the Florida Sun Grown Farm. Thank you to everyone who came and supported the Florida Barn Smoker event.

Linked below is the album of all the pictures that were taken at the event, feel free to tag yourselves and your friends!

Keep your eyes peeled, Connecticut Barn Smoker Tickets will be on sale soon. We hope you can join us!