Wow, what an exciting weekend we had on the Florida Sun Grown Farm celebrating the American Tobacco Experience at the 3rd annual Florida Barn Smoker. Hundreds of people from around the country made their way to Clermont, FL to gather and show their love of the leaf, particularly the Florida Sun Grown Cuban Corojo grown on the farms owned by Jeff Borysiewicz.

The farm owned and managed by Jeff Borysiewicz, opened in 2012. His vision is a rebirth of Florida tobacco throughout the United States with Drew Estate being the strategic partner. His farm is the first time since the 1970’s that tobacco for premium hand-rolled cigars is being grown in Florida, revitalizing an industry and a region. However, it’s not easy being a farmer and sometimes mistakes happen. If you’ve seen this video from the farm this year, you’ll know that he’s faced some extraordinary challenges with this year’s crop. This past month 70,000 seeds were replanted in the fields in time for the growing season, and we even had our attendees get their hands dirty and help plant their own FSG seedlings.

After a rousing state of the farm address by Jeff Borysiewicz and welcoming from President and Founder of Drew Estate, Jonathan Drew, attendees made their way to 3 separate stations highlighting the different stages of tobacco production. The first stage is the Seed to Field Station, hosted by Pedro Gomez and Jeff Borysiewicz. There it was discussed what is it about this Florida Sun Grown tobacco that makes it Unique? The Climate, the Soil, and farming techniques all play a major role in the final product, but the mystery had to be unlocked once it made its way to Drew Estate’s Nicaraguan Factory for extensive aging. Afterward, each attendee was handed a seedling and they walked over to the field. They then took a stake and punched a hole in the ground, then planted their seedlings into the ground, getting to have their own mini-farming experience. Many poured a bit of water from their bottles to give their tobacco a little extra love. For everyone who took home seeds, check out how to plant and grow them here! 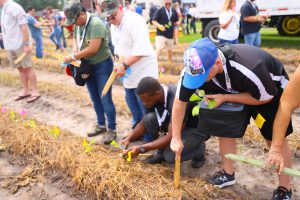 After the airhorn blows, attendees were escorted into the tobacco curing barn, past farmhands who were sewing leaves to be hung in the barn to cure. There Jonathan Drew greeted them and walked them through the process of how the staves full of sewn tobacco leaves are hung throughout the barn and left for 60 to 120 days to cure. There heat from the air turns the leaves from a vibrant green to a rich brown. This process was then compared to how it is done in Kentucky, where for our Kentucky Fire Cured cigars, the tobacco is cured by burning oak, hickory and other hardwoods beneath the tobacco. He also explained how since this tobacco is grown and harvested in America, and that this tobacco is primed it is more expensive. Priming is the process in which the viso, seco and ligero leaves are picked individually vs the stalk cutting process which the entire plant is cut at the stalk and brought to the barn to cure.

The horn sounds again, and the attendees move on to the final station, a blending seminar with Willy Herrera and Henry Pineda. Willy had some reservations at first working with the Florida Sun Grown but after numerous blends (many really god awful too, just ask him) the right combination of fillers, binder and wrapper were dialed in, creating a super-premium smoke with a captivating taste and aroma. Attendees also were given an FSG tabaquiado, made entirely of Florida Sun Grown leaf, and entered a long ash competition. Winners were given a Florida Sun Grown ceramic ashtray.

After the stations, everyone returned to the main tent for a delicious BBQ lunch catered by Pig Floyd’s. They were also able to sample spirits from our friends at John Drew Brands, Partida Tequila, Jim Beam, Knob Creek, Maker’s Mark, MBRoland, Diplomatico Rum, Brugal Rum, Macallan, Wheatley Vodka, and Artisanal Imports. John Deere and Machine Gun America were on hand demonstrating their fantastic products. Also, our friends at Cigars for Warriors were raffling off some stunning prizes handmade at Subculture Studios in Nicaragua, including 2 FSG Mega Standing Ashtrays, to raise money to pay for shipping of cigars to our fighting men and women overseas. 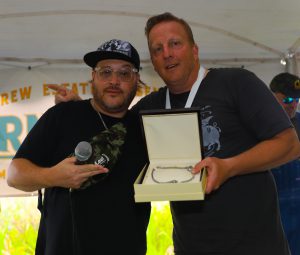 Overall it was a great day, the weather held out and we came together to celebrate our love for the Florida Sun Grown tobacco. All told, we raised $13,500.00 for Cigars for Warriors and stay tuned to see how our attendee’s seedlings are growing on our social media @DrewEstateCigar. Here is a link to our photo album of the event, be sure to tag yourself and your friends.