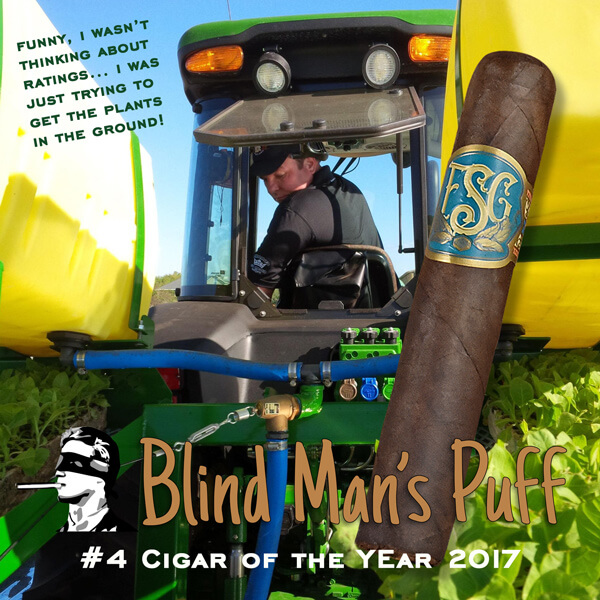 Today Blind Mans Puff announced their top 25 cigars of 2017 and Drew Estate was honored to have the Florida Sun Grown Toro ranked at #4!

In their initial review, Blind Man’s Puff exclaimed, “Well I had my doubts in the beginning this stick ended up being a very delicious smoke. The first third was good but then the second and then the third part of the cigar got better and better the longer it smokes, eventually not bring it down to nearly nothing. Definitely box worthy, go out and buy it now!”

Next up the collaboration between Drew Estate and Caldwell Cigar Co. All Out Kings Gimme Your Lunch Money came in strong ranking at #10 on their list! All Out Kings is made at La Gran Fabrica Drew Estate in Esteli, Nicaragua featuring a Connecticut Stalk Cut and Sun Cured Habano Wrapper, with Indonesia Sumatra Binder, and filler comprised of Jalapa Viso, Esteli Viso, Dominican C-98 Seco, and Connecticut Broadleaf Ligero.

In their original review Blind Man’s Puff finds the All Out Kings, “…this was an excellent cigar. It was constructed well, it burned well, it game full draws of rich and chewy smoke. The flavors started with subtle nuance and progressed as the cigar was smoked, and intensity increased the whole way. The burn line was solid and the draw was perfect. The ash was a bit on the flaky side, but that is not uncommon for a 46 ring gauge cigar. I want to say that this cigar smoked and tasted like a hybrid of products, but I honestly think they created something new. If you enjoy rich smoke output with a vast array of flavor nuance, this cigar is for you. What am I saying? Who doesn’t enjoy that? Go get some.”

Our partners at Joya de Nicaragua also ranked on the list with the Antaño Gran Reserva Robusto coming in at #22!

Blind Man’s Puff noted, “I liked this. A lot. I’d be happy to have a humidor packed full of them, and hope they’re priced to allow that… It’s not terribly nuanced, or subtle, but it’s really good at being a really nice medium-full, ultra peppery cigar.”

We are honored to be ranked on this list, thank you Blind Man’s Puff!