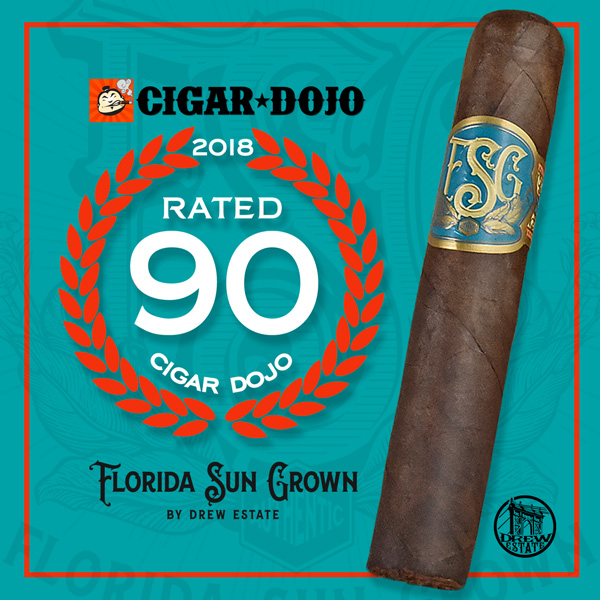 Our friends at Cigar Dojo have reviewed the Florida Sun Grown Robusto on their website and they were blown away, awarding the cigar a 90 rating.

The “FSG” by Drew Estate project began in 2011 and debuted in 2016 at the Florida Barn Smoker on the Florida Sun Grown Farm owned by Jeff Borysiewicz. The core FSG blend features Florida Sun Grown filler with select Nicaraguan fillers which adds an authentic Florida agricultural nuance to this unique and captivating blend. The binder is a Habano seed tobacco from Honduras and the cigar is finished off with a lush Brazilian Mata Fina wrapper.

In addition to four core sizes, Drew Estate is releasing a Limited Edition Trunk-Pressed Toro. This prized cigar features its own unique blend which utilizes a Connecticut Broadleaf wrapper, Mexican binder, and Florida Sun Grown filler tobacco, along with fillers from Nicaragua and Honduras.

The Cigar Dojo team found, “Borysiewicz has really cultivated a truly unique tobacco and the FSG uses that proprietary yield in terrific fashion. I must stress that this cigar’s uniqueness is polarizing and may not be for everyone, but I truly appreciated it. The construction of this cigar is sharp, with sweet and savory notes zipping through the entire line. A final note, I do have some FSGs pulled back that are earmarked for three, five, and 12-year aging. We’ll see how time graces this blend.”

Thank you Cigar Dojo for the wonderful review!