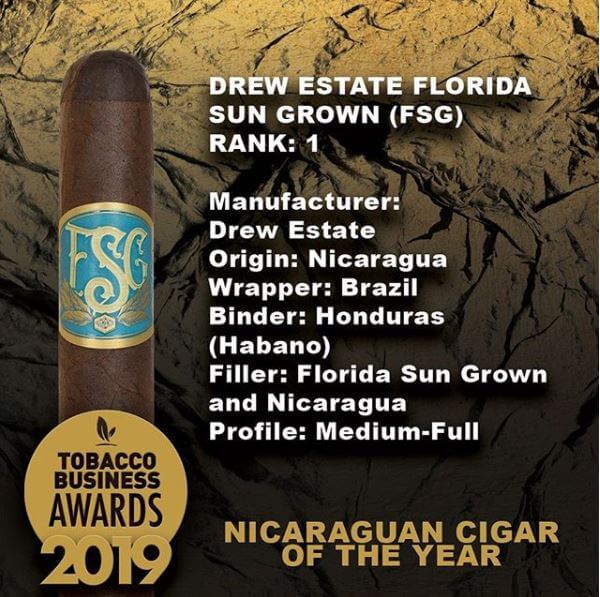 Today Tobacco Business Magazine published their list of the Top 25 Cigars of 2018 as voted on by consumers, manufacturers, and retailers, and the Florida Sun Grown by Drew Estate is truly honored to be named #1 Cigar of the Year!

Jonathan Drew, President and Founder of Drew Estate, had this to say about Florida Sun-Grown’s (FSG) big win, “This is a big honor for Drew Estate. When I think of 22 years in business and the things that we create, think for yourself for a second—take what you do in Nicaragua, be able to transcend here to the U.S. The bottom line is on the FSG, what it comes down to is that we just want to kick it at Drew Estate. We blow the brain box on what we do because we live it. With the FSG, that’s a deep extension, bringing Florida Sun Grown tobacco—when you take tobacco and grow it in the United States, you encounter many problems and many difficulties. Jeff Borysiewicz of Corona Cigar Co. has done what hasn’t been done since 1977—brought tobacco back to Florida.”

The Florida Sun Grown by Drew Estate was also named 2018 Nicaraguan Cigar of the Year at the 2018 Tobacco Business Awards. We are honored by Tobacco Business Magazine and are celebrating this momentous occasion!