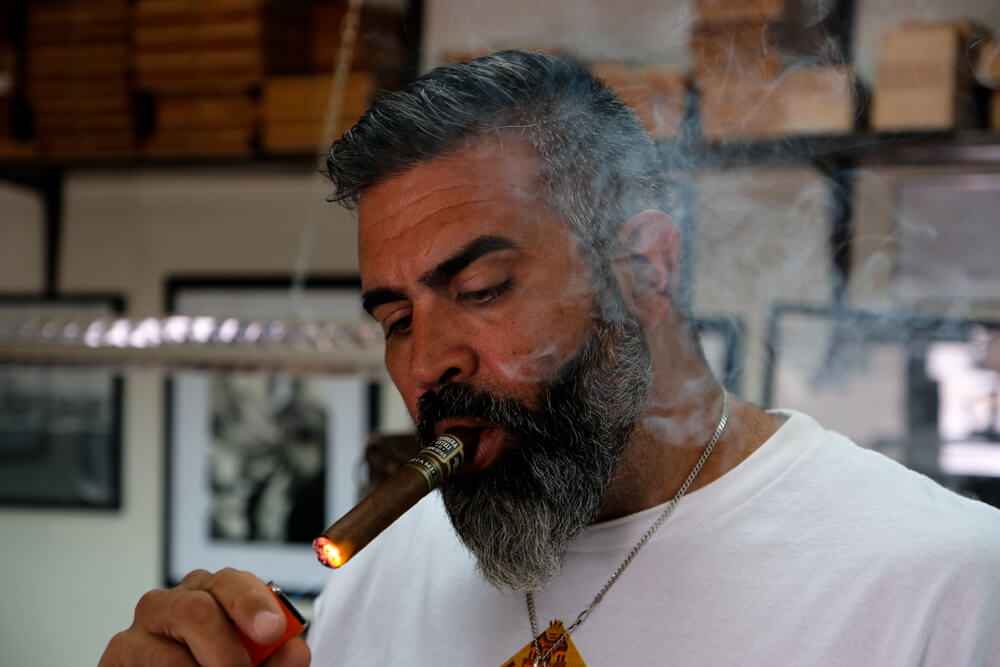 Today we had a chance to catch up with Drew Estate Master Blender Willy Herrera at the famed El Titan de Bronze Factory on Calle Ocho in Miami. As he was taking a break from inspecting the soon to be released Herrera Esteli Miami’s in the aging room, he sat down to answer a few questions about his time in the cigar industry.

Willy let’s start from the beginning, how did you get into cigars? What was your first job in the industry?

My first job was working here at El Titan de Bronze. I started here full time here in the early 2000’s and I just went in head first. I had to learn everything on a day to day basis. I was always a smoker so it wasn’t new to me but what was new was figuring out how to make a cigar, what made all the cigars different and blending. I got to learn all of that on the job every day. Like I have told other people, the cigars we were making here weren’t for my palate and I wanted to make something I could enjoy. So I taught myself how to make and roll cigars. I would blend different things every day, always learning.

El Titan de Bronze is world renowned and has been for many years. Tell me about its history.

Well the name came from a Cuban patriot which was one of 8 brothers. As the story goes, the mother would send from the oldest to youngest, one at a time to the revolution. Each would pass away and she would send the next son. When they got to Antonio, he was the one that lasted the longest and according the legend could not be killed. That is how he earned the name The Bronze Titan or El Titan de Bronze. My grandfather loved the story and that’s how he got the name of the factory.

Since becoming Master Blender at Drew Estate, what’s it like to come back home to El Titan?
Oh man, it’s great! You are sitting down, working here at the factory with the tobaccos. The best part is seeing all the regulars come in here while I am working. The look of surprise on their faces, exclaiming “Oh you’re back! How have you been?” It’s really cool, especially having access to Cuban Coffee all the time and steak sandwiches.

I am going to have to go with Toro as well for the Miami. I’ve talked to a bunch of customers at events and they ask me the same question. I really don’t know the reason why exactly, it’s the same tobaccos and same blend. This blend really shines in a toro size, and I really enjoy it. Pyramide Fino as well for that matter, for the Miami the bigger ring gauges make it special.

So we mentioned the Brazillian Maduro, which is coming out a little later this year, how long does it take you to create a blend you fell in love with?

Man, there is no set time. It could your first blend that you sit down create and let it age. Or it could take one to two years! You can’t say it takes 6 months or a year. Every blend is different and it depends on what you are trying to achieve with that blend. It depends on what tobaccos you are incorporating and a lot of other factors. Typically, it’s taken me anywhere from a year to 2 years to finalize and be happy with a blend.

All our fans want to know, how many cigars do you have in your stash at home?
Wow, I really don’t know how many I have. I have 6 humidors stashed all over the house. My wife is constantly complaining about how many more humidors and how many more cigars am I going to bring home. The problem is, am in Nicaragua a minimum of once a month, and every time I am there, I am working on new stuff and bringing it back. 50 cigars this trip, 75 the next and so on. Different blends and different things I am working on. Hundreds of cigars with white bands and just numbers on them.

Wow, what do you store all that in?
6 good sized humidors and a couple 120 quart coolers at the house. So I got cigars all over the house.

Are you saving any of those cigars? Ones you can’t bring yourself to smoke?
I’m gonna smoke them all. I don’t have the patience. I am not one to set cigars aside 1, 2 or 5 years like a lot of our fans do. I mean I still run into customers who have the original releases of Herrera Esteli and I am blown away. They get a kick out of bringing me a Lonsdale, or a toro and it’s crazy. But I don’t hold anything back.

Now, we all know you love to eat. What is your favorite spot to eat in Miami, and what should we get when we get there?

My favorite Cuban place in Miami is not too far from here, it’s called El Exquisito. Now what I always get is one of two things; either the breaded steak with white rice, black beans and plantains or my second favorite is Oxtail cooked with moro which is white rice cooked with black beans and maduros. I mean that right there is a homerun.

Now what cigar would you pair with that?

I don’t pair nothing man. I pair everything with Diet Coke. People ask me that question that a lot and my answer is always a diet coke. Now to cleanse my palate especially at the factory, club soda. That will cleanse your palate and you are ready to move on to the next blend.

Thanks for your time Willy, we are looking forward to these Herrera Esteli Miami and Brazilian Maduro’s to launch later this year!