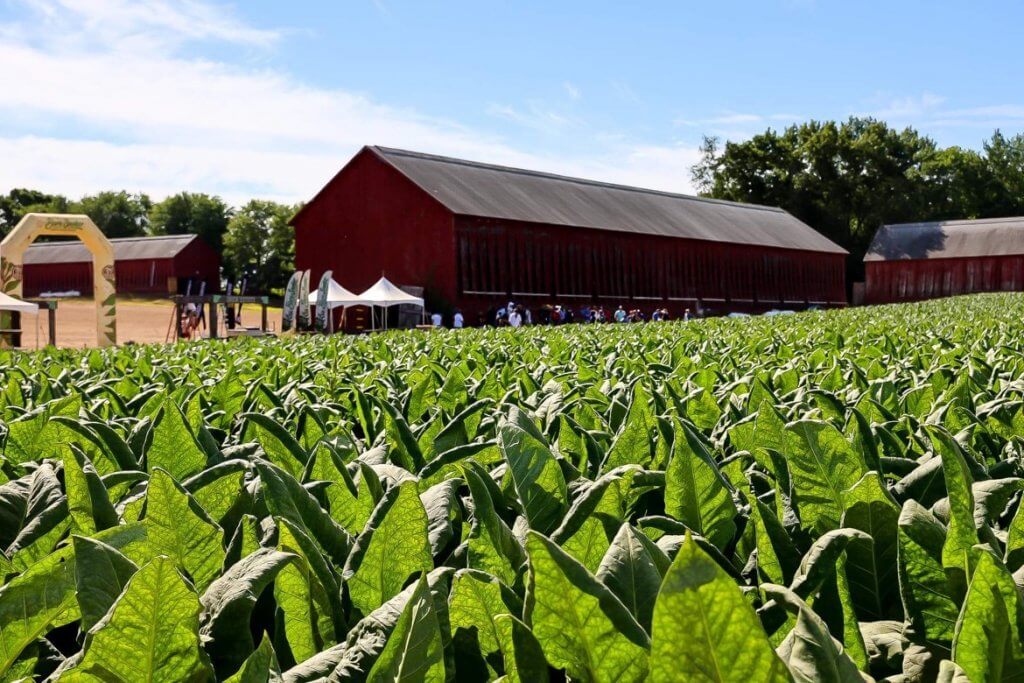 On the weekend of Aug. 12-14, Drew Estate and approximately 1,200 of its closest friends converged on Dunn & Foster Farms in Ellington, Connecticut, for the 2022 Connecticut Barn Smoker.

“The swag, the food and the cigars easily covered the cost of my ticket,” said Vinnie from Billerica, Massachusetts, who was attending his second Connecticut Barn Smoker. “The value of the experience is priceless. I always liked Drew Estate but when the company sent me the Swag bag from last year’s cancelled event, I like them even more. Drew Estate is obviously a company that enjoys giving back to the people who are loyal to their brands.”

Connecticut Barn Smoker guests started their experience with a cold coffee and a Tabak Especial before moving over to the party tent to enjoy their smoke and hear Drew Estate’s Jonathan, Pedro and Jack Heyer, and Dunn & Foster Farms, John Foster, explain the days’ programs and thank everyone for attending. Then the approximately 600 people were divided into three groups to begin their educational tour of the Liga Privada wrapper experience from the seed to the finished cigar. Pedro and Jeff manned the Seed to Field station, explaining how the seeds are prepared, planted in the fields and cared for while growing. Jonathan and John were posted in the curing barn to describe how the tobacco is harvested, hung in the barn for curing and how it is shipped and processed at Drew Estate. Willie and Connecticut tobacco farmer, Steve Jarmoc, added more details about harvesting the tobacco and how it is blended into Liga Privada cigars.

“Experiencing the educational tours, I have a whole new appreciation of all the hard work that goes into making Liga Privada,” says David from Westchester, New York, who was attending his first Barn Smoker. “It was fun and educational and everyone who spoke at the stations knew what they were talking about. Quality is the best way to go, and I can really see how Drew Estate works with the farmers to produce great quality cigars.”

Beginning at the very first Barn Smoker, held in Kentucky in 2014, raising money for Cigars for Warriors has been a key component of every Barn Smoker and the 2022 Connecticut Barn Smoker was no exception. Cigars for Warriors is a 501(c)(3) charity that supports deployed American service men and women by providing them premium cigars to enjoy. In total, the charitable organization has shipped more than a million cigars overseas in the last decade.

As part of their entry packs, each guest received a raffle ticket to win one of nearly 50 one-of-a-kind swag items designed and created by Drew Estate’s own Subculture Studios. Drew Estate-themed Barrel bars, free-standing ashtrays, original artwork, custom kicks and so much more was available for every guest to potentially win. To increase their chances of winning, guests bought more raffle tickets directly from Cigars for Warriors. At the end of the weekend, between the raffle, a live auction and a $5,000 donation by Drew Estate, the Connecticut Barn Smoker raised a total of $32,000 to help Cigars for Warriors ship those cigars to deployed service members around the world.

“I’m a huge fan of Drew Estate’s swag,” explains Mike from Wilmington, Massachusetts, who was attending his second Connecticut Barn Smoker. “You get so much swag from the ticket and all the brand tents throughout the day but who wouldn’t want a Liga Privada barrel bar in their home? Knowing that the extra dollars for more raffle tickets goes to support Cigars for Warriors…it’s more incentive to hope to win something special.”

As the Connecticut Barn Smoker wound down each day, it was clear that the event was a huge success. Tickets for the Barn Smoker and DE25 Exclusive Pre-Party sold out almost immediately with people coming to Connecticut from more than 20 states and Canada. The second day gave more people a chance to attend their first Barn Smoker and many of them commented that they will return.

“You get something to eat, something to drink and something to smoke,” Bill from Long Island, New York summarized his first Barn Smoker experience. “Who could want anything more? I am absolutely coming back next year and I’m bringing my friends!!!”