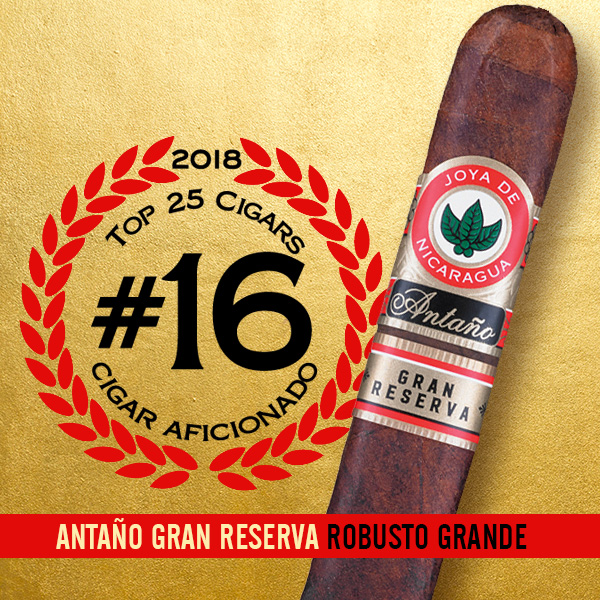 Our friends at Cigar Aficionado write, ” Everyone thought it was gone forever, but last year, Joya de Nicaragua brought back its Antaño Gran Reserva line. Once a limited-edition brand from 2005, the new cigar is made with the same blend as the Joya de Nicaragua Antaño 1970, only this Gran Reserva has older filler tobaccos. In the cigar world, a little extra age can go a very long way. In this case, it put the Robusto Grande on the Top 25 list. Joya de Nicaragua is the oldest cigar factory in Nicaragua, and the company believes the Gran Reserva to be emblematic of the quintessential Nicaraguan cigar. The wrapper is from Jalapa and full-bodied ligero from Estelí is at the heart of the filler, but the extra age has refined the blend.”

“The main alteration that comes with the Antaño Gran Reserva is that we have added fillers that have been aged for up to five years. As a result, we have obtained a more refined and mature version of the Antaño 1970.” said Juan Ignacio Martínez, Executive President of Joya de Nicaragua at a meeting room at the factory that many Antaño enthusiasts have visited.

The refined and matured Antaño Gran Reserva can be found in three different presentations:

Congratulations to our friends and partners at Joya de Nicaragua, on both their ranking and celebrating their 50th Anniversary!