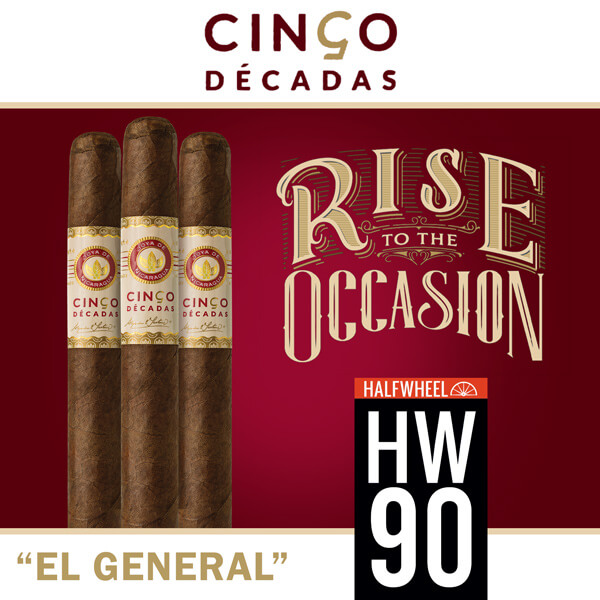 Our colleagues at Halfwheel have recently reviewed the Joya de Nicaragua Cinco Decades El General, bestowing it with a 90 rating and a rave review.

Cinco Decadas is about celebrating being first, being best or just being. It is a testament of the ultra premium quality that characterizes the JDN family, made exclusively with prime extra-vintage leaves. It carries an immaculate balance accompanied by sweet and spicy notes. Its silky smooth smoke delivers a rich and fulfilling experience.

“Cinco Decadas is a Nicaraguan cigar of unparalleled elegance. This cigar is intended to celebrate a special moment in our company’s history and offer an opportunity to pause, reflect, give thanks – and look to the future,” said Dr. Alejandro Martínez Cuenca, Owner and Chairman of Joya de Nicaragua.

Charlie Minato of Halwheel finds, “blueberry sweetness add itself to the mixture before pepper hits the palate. Once again, it’s pretty complex, though only medium-plus in intensity. The latter changes as the flavor becomes full with burning cedar in the mouth over top of some burnt bread and touches of spice and oregano. Through the nose there’s some blueberry sweetness and butter, though it’s overwhelmed by the flavors in the mouth…As for this particular cigar, it’s complex, detailed and smooth; a good cigar…”

Congratulations to our friends at Joya de Nicaragua and thank you Halfwheel!