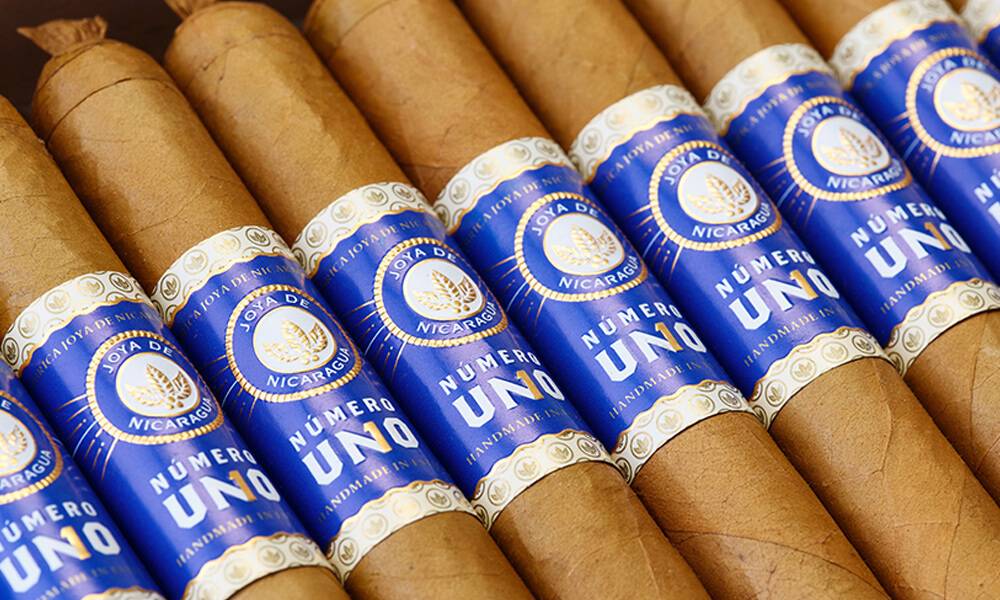 Since being released nationwide in the summer of 2019, Número Uno has become a preferred smoke for cigar enthusiasts everywhere. Originally blended for World Leaders and handed by Nicaraguan ambassadors on official missions around the globe, Número Uno is part of Obras Maestras, the designation of Joya de Nicaragua’s ultra-premium family of cigars. Since its first arrival in stores at events, it has received awards and accolades from all who have enjoyed it, becoming the top cigar of 2018 and 2019.

Joya de Nicaragua’s masterpieces are known for their highest standards of quality and for their limited production.  In 2020, there will be only one batch of 1,600 boxes of Número Uno coming to the United States: 800 boxes of the original L’Ambassadeur and now in its first national release 800 boxes of Le Premier.  These very limited batches will be available as of July 2020 exclusively for brick and mortar retailers that participate in the Drew Diplomat Retailer Program.  A smaller allotment is being reserved for global markets.

“We would love to produce more Numero Unos, but we have a limited output in the factory.  Each vitola is crafted just by one couple of rolera and bonchero, the ones that have the skills to deliver such delicately perfection .  Then, you have the fact that we are very picky when it comes to selecting the best tobacco leaves that will go in this cigar,” mentioned Mario Pérez, head of Fábrica Joya de Nicaragua S.A.

The highly acclaimed Número Uno features a silky and delicate Ecuadorian Connecticut wrapper over a Nicaraguan binder and Nicaraguan fillers. It provides medium body and strength, in a smoke that is refined, complex and elegant. The flavor notes are creaminess complemented with light pepper. With vitolas being named in accordance with the brand’s diplomatic origin, the 2020 release Le Premier, is a 6 ⅞ x 48 Churchill that will be offered in a 25ct box, at MSRP $414.93/box or $16.60/stick.  This vitola  completes a small portfolio of just three sizes along with: L’Ambassadeur (6 ⅝ x 44)  and L’Attaché (5 ½ x 42), a store exclusive for Updown Cigars in Chicago, IL.

“Número Uno is a very special product for us; we always say it’s the dream of any cigar maker, as we responded to the market’s desires to have this product.  It represents the pride of our country, as this was the blend that we created to honor the most important guests, and now it is sold only in the best brick and mortar stores around the world,” said Juan Martínez, Executive President of Joya de Nicaragua.

As with other releases from Joya de Nicaragua’s portfolio in 2020, Le Premier will be showcased by Juan Ignacio Martínez and the Drew Estate team throughout the country in virtual meetings with top US retailers this summer, as a symbol of the companies’ support of specialty retailers as we embark together in the journey of overcoming the challenge that 2020 has represented thus far.

“We decided not to stop any of the new product releases we had in our pipeline for 2020,  it was harder to get them here in time for the summer after having the factory closed for some days, but we made it happen because we owed it to our workers, but especially to our customers, our friends around the world that are fighting to keep their businesses afloat.  It is a testament to our hope in the future, to our historic resilience of overcoming difficult situations,” said Dr. Alejandro Martínez Cuenca, Chairman.

The company’s commitment to quality, along with its skillful and resilient people, have been rewarded with the industry recognition of Cigar Factory of the Year 2018 & 2019.