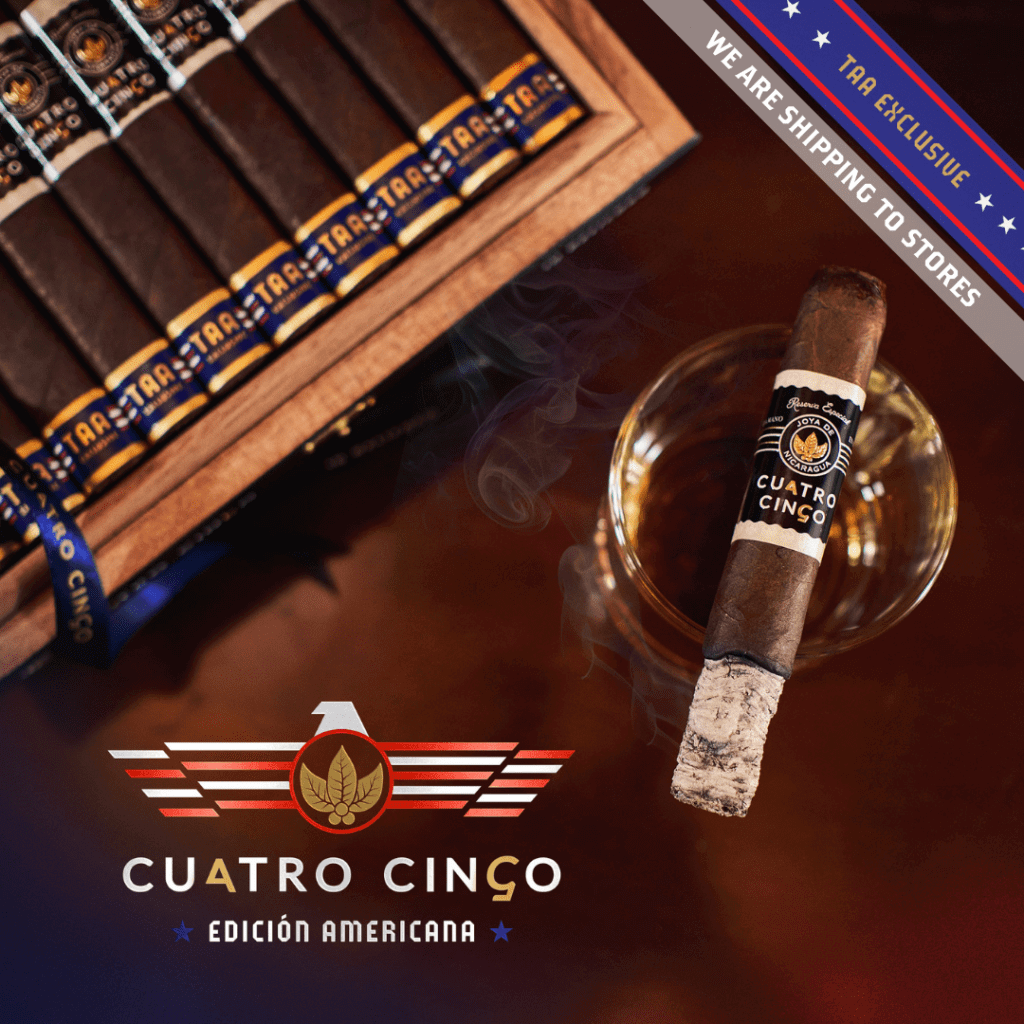 Since its founding in 1968 as the first premium cigar company in Nicaragua, Joya de Nicaragua has enjoyed strong ties with American cigar lovers and their retailers. During the administration of Richard M. Nixon, Joya de Nicaragua’s Clásico was even the official cigar distributed to guests attending functions at the White House. In 2021, the United States continues to be one of Joya de Nicaragua’s most important markets and the company is celebrating its strong ties to America by releasing Cuatro Cinco Edición Americana, the second regional edition of its legendary Cuatro Cinco cigars, which will be available exclusively at Tobacconist Association of America (TAA) member retailers.

Since its original release to celebrate Joya de Nicaragua’s 45th anniversary in 2013, the limited edition Cuatro Cinco cigar has been one of Joya de Nicaragua’s most popular cigars and it has consistently been one of the company’s highest rated cigars as well. The highly acclaimed blend features a Nicaraguan Criollo wrapper and select Grade A Nicaraguan filler tobaccos. The finished cigars are aged inside vintage white oak barrels that were used by a world-renown rum distillery for at least one year. The Cuatro Cinco Edición Americana TAA Exclusive is a 6 x 54 Belicoso.

“When we were deciding what the next TAA product should be, we knew it had to be special,” says Joya de Nicaragua’s Executive President, Juan Ignacio Martinez. “When the team proposed the Belicoso, the decision was made, there’s no other vitola in the Cuatro Cinco family that smokes closer to the original limited edition than this one.”

Cuatro Cinco Edición Americana TAA Exclusive is limited to 500 10-count boxes and features special artwork incorporating a bald eagle in the company’s logo on the box, as well as a second band on the foot denoting it as a TAA exclusive cigar.

“These are some of the best cigars that come out of our factory,” says Daniel Barrios, Joya de Nicaragua’s Global Commercial Manager. “The stories we tell with them need to be special. We have selected the bald eagle because of what it represents to our American friends, an example of stamina, power and freedom. In 2021, JDN is celebrating Nicaragua’s independence bicentennial, and what a better symbol to connect us both than the symbol of freedom.”

The Cuatro Cinco Edición Americana TAA Exclusive was formally presented to the trade during the TAA Virtual Conference on March 23rd and it is now being shipped to TAA retailers.