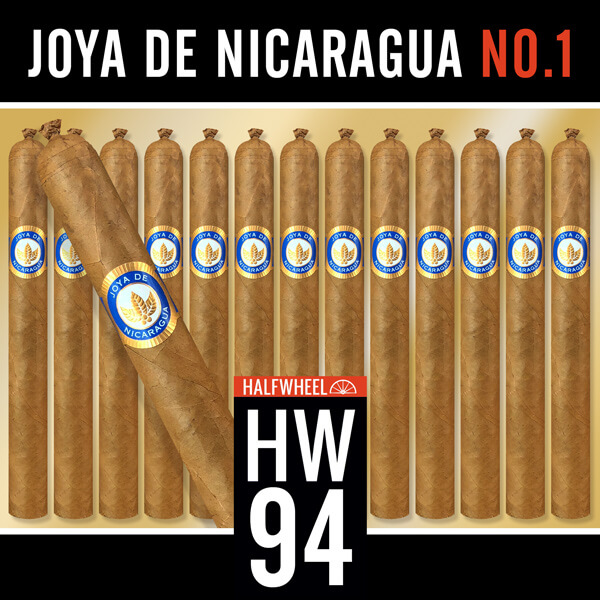 Joya de Nicaragua No. 1 Honored with 94 Rating by Halfwheel

Our friends at Halfwheel have recently reviewed the Joya de Nicaragua No.1, a Drew Diplomat event only cigar, and it has earned a tremendous rating of 94.

The Joya de Nicaragua No.1 is a 6 5/8 x 44 lonsdale, enveloped in a creamy Ecuadorian Shade wrapper over bold Nicaraguan binder and fillers. This cigar is the Diplomatic cigar of Nicaragua, given out by ambassadors all over the globe.

Patrick of Halfwheel caps his review by stating, “After smoking the first cigar, I had started to consider just how many superlatives I’d be able to heap on this cigar without going overboard. The other two samples brought it back from the stratosphere but kept it head and shoulders above the majority of cigars I have had smoked in recent memory. At its best, the Joya de Nicaragua No.1 is refined, complex and elegant; at its relative worst, pepper throws it a bit out of balance but shows a staple of what Joya de Nicaragua is most known. If I knew I could consistently get the first cigar I smoked, I’d be at every Drew Diplomat I could find to stock up on these. Even with the variance I experienced among these three samples, I’d still be at the next event to grab some more as it is not just one of the best Joya de Nicaragua releases I’ve smoked, but one of the better cigars I’ve enjoyed from any manufacturer.”

The Joya de Nicaragua No. 1 can only be found at Drew Diplomat events and given to those who make a qualifying purchase while also being a member of Drew Diplomat. Fans are encouraged to download Drew Diplomat the official mobile application of Drew Estate – The Rebirth of Cigars which is available in the App Store for iPhone®, and iPod Touch® and on Google Play™ for Android™.

Thank you to Halfwheel for this tremendous review and congratulations to our friends at Joya de Nicaragua!