Today we will be discussing the process of Barrel Fermentation that we learned on the L.A. Poche farm at the Louisiana Barn Smoker. Barrel Fermentation is not a new process, in fact it was initially discovered by the Native Americans in the Louisiana region hundreds of years ago. The process involves taking tobacco, adding water and pressure and letting it ferment for many months. In the late 1700’s, new comers to the region learned this technique and began applying it to Louisiana Perique tobacco.

Fast forward 2 hundred years, Mark Ryan owner of L.A. Poche, has become the sole proprietor of Barrel Fermented Perique tobacco. A huge fan of Drew Estate, Ryan and Jonathan Drew met and began discussing a plan for using his process on Perique tobacco with the Dark Fire Cured tobacco for a special project. That project was the Pappy Van Winkle Barrel Fermented that would be sold by the daughters of Julian Van Winkle through their site pappyco.com

The process for Barrel Fermentation begins after the tobacco is harvested and processed as we discussed yesterday. The 1 pound torquettes, or bundles of tobacco, are placed strategically in oak barrels. Then water is added and immense pressure is applied via railroad jacks. The pressure breaks down some of the cellular structure of the tobacco and the resulting heat causes the water to bubble. The tobacco is removed 2-3 times at a minimum, and the total process of fermentation takes 12-18 months. 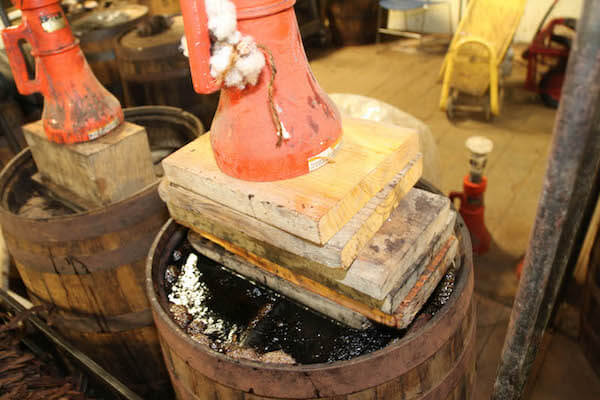 This lengthy process is part of what makes the Pappy Van Winkle Barrel Fermented so special. However, the long wait is worthwhile for the completely unique flavor of the cigar. It is unlike anything that Drew Estate has created before and it is produced only under the strictest of quality control.

Thanks for taking the time to learn about Barrel Fermentation, now let’s light up a Pappy Van Winkle Barrel Fermented to celebrate.