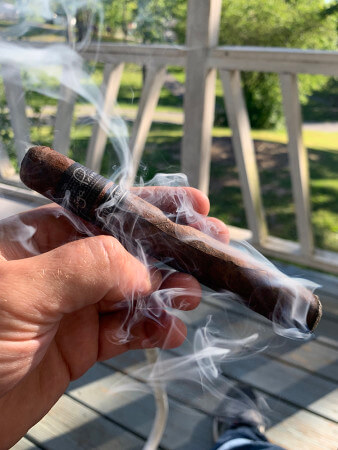 The Liga Privada 10-Year Aniversario, released in limited quantities each month to randomly selected retailers, was released at the 2018 IPCPR trade show to honor the 10th Anniversary of Liga Privada. This week it has earned a rave review from our friends at Leaf Enthusiast scoring a 9.5 out of 10!

David Jones of Leaf Enthusiast has this to say, “Following up the Liga Privada #9 and T52 blends was destined to be an awesomely difficult job. How do you make something unique, yet just as impactful as those original blends? Willie Herrera has proven up to the task, though, crafting the Liga Privada 10 Year Aniversario with plenty of notes reminiscent of those previous blends, yet having its own identity with notes of cedar at the beginning, giving way to coffee, leather, chocolate and earth, all while providing the full-bodied goodness that has become a staple of the Liga Privada lines. These are extremely limited right now, but in future years they should be more available. They are worth the wait.”

Our dedication to collaborate with the most renowned growers in the Connecticut River Valley resulted in the next chapter of Liga, the Liga Privada 10 – Year Aniversario. This full throttle beast of peppery spice is swathed in a robust Criollo capa from the heart of the Valley, where we grow the mighty leaf that graces Liga Privada. Featuring a San Andres Otapan Negro Último Corte capote that adds razor sharp spice and burn to a core blend of well-aged Nicaraguan and Honduran tripa leaf.

We are truly honored by the team at Leaf Enthusiast for their words, and hope everyone hunts down the Liga Privada 10-Year Aniversario to try it for themselves!