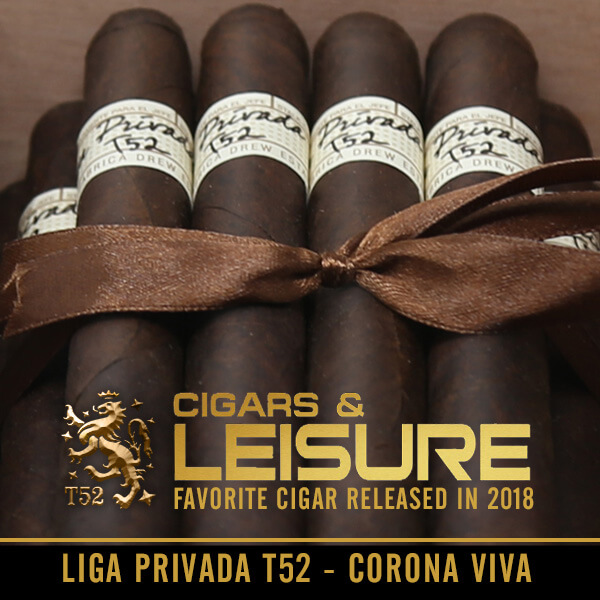 Cigars and Leisure Magazine has released their 4th Annual Readers Choice awards and Drew Estate has come out on top! The Liga Privada T52 Corona Viva was awarded the Readers’ Choice for favorite cigar released in 2018.

The Liga Privada T52 features a Connecticut Stalk Cut Habano wrapper, over plantation grown Brazilian Mata Fina binders, and Nicaraguan and Honduran fillers. Meticulously blended over a period of two years to be a worthy humidor companion to our much heralded Liga Privada No. 9 recipe. With notes of black pepper and spice, it is our choice when desiring a stronger, more robust smoke. Like its predecessor, it is a complex marriage of seven distinct aged tobaccos handcrafted by only our absolute best torcedors. Each cigar is guaranteed to be flawless in construction, flavor and character…without exception. The Liga Privada T52 Corona Viva is highlighted in a 152mm x 46 presentation, perfect for your smoking pleasure.

In addition, our partners at Joya de Nicaragua were honored with the highest rated cigar of 2018! Cinco Decadas is about celebrating being first, being best or just being. It is a testament of the ultra premium quality that characterizes the JDN family, made exclusively with prime extra-vintage leaves. It carries an immaculate balance accompanied by sweet and spicy notes. Its silky smooth smoke delivers a rich and fulfilling experience.

Thank you to the readers of Cigars and Leisure magazine for your votes! This is a tremendous honor.