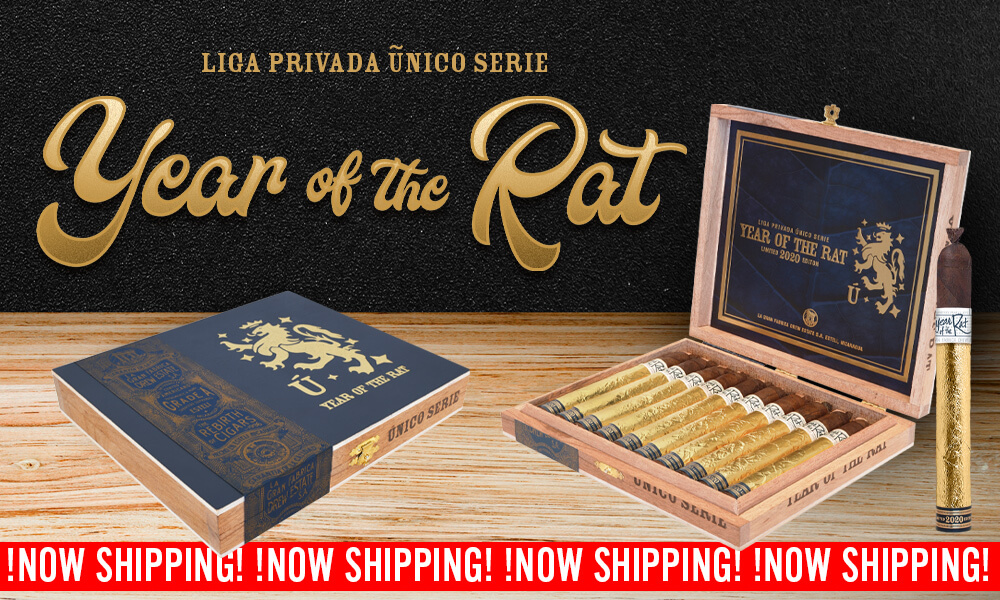 Drew Estate announces today that the Liga Privada Unico Serie “Year of the Rat” is shipping to Drew Diplomat retailers hosting Virtual Events starting on June 1st. This release will be showcased on the upcoming Freestyle Live: Special Edition hosted on facebook.com/drewestatecigar on June 11th from 7:00-9:00pm EST, and includes special guests, surprise announcements, and giveaways.

The Liga Privada Unico “Year of the Rat” cigars are presented in a 5 ½” x 46 vitola, featuring the iconic fan tail capa illustrated on select Unico Serie cigars. This commemorative cigar is highlighted and defined with a lush Connecticut Broadleaf wrapper, a dark, rich Brazilian binder and nasty, hearty Nicaraguan and Honduran fillers. Each “Year of the Rat” is wrapped in gold foil, packaged in a beautifully embossed, blue Liga Privada Unico box.

Liga Privada Unico Serie “Year of the Rat” will be available for purchase at Drew Diplomat retailers hosting Virtual Events starting June 1st. The list of upcoming Virtual Events hosted by Drew Estate can be found at www.drewestate.com/events which is continually updated.

From the Wynwood Safehouse, Jonathan Drew Founder and President of Drew Estate exclaims, “The Rats are coming June 1st … so we kindly ask you to welcome them with open arms during the planned virtual events that the team has been working on. Year of the Rats were first released many years ago in partnership with the Florida Panthers and were only available at their stadium in Miami. Later, I used them for some of my personal events until Willy and the Marketing dudes forced me to give em up. Frankly, me and the Rats are still kind of annoyed about it. I have a conference call with the Supreme Team Rat Lords to review how we will respond. Stay tuned …”

For full coverage of the Liga Privada Unico Serie Year of the Rat and all of Drew Estate’s upcoming national releases check out our 2020 #DESummerTakeover promotion at www.drewestate.com/summertakeover and be sure to tune in to Freestyle Live: Special Edition hosted on facebook.com/drewestatecigar on June 11th from 7:00-9:00pm EST.