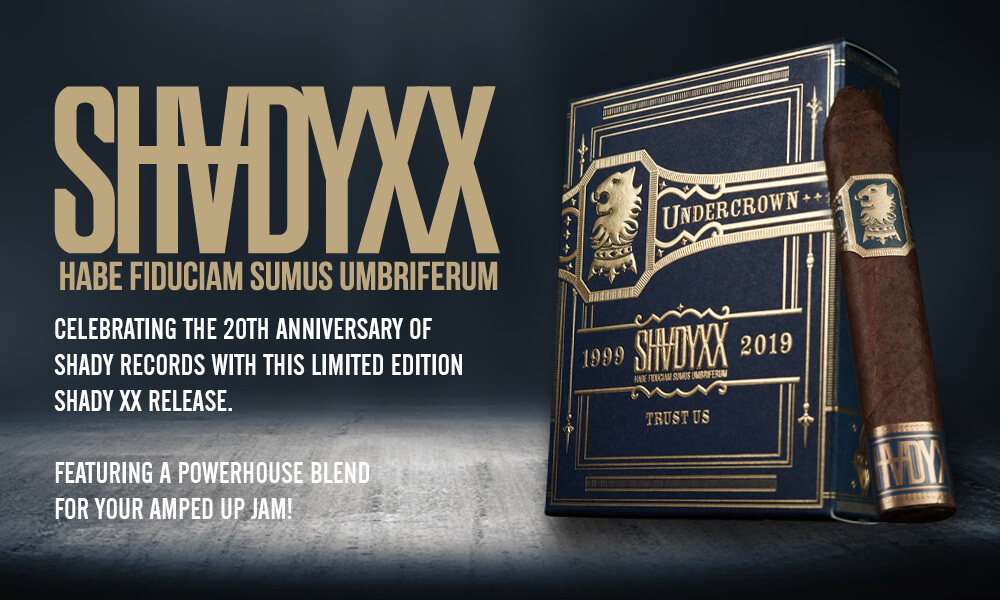 Drew Estate announces today the national release Undercrown ShadyXX, in collaboration with Shady Records for their 20th Anniversary. The Undercrown ShadyXX will be displayed in Drew Estate’s Booth at the IPCPR Convention and Tradeshow, held June 29-July 2, 2019 in Las Vegas, Nevada.

Originally released in only 10 Detroit area retailers in 2014, the Undercrown Shady remains one of the most consumer demanded limited editions in the Drew Estate portfolio. This powerhouse blend, like the Undercrown Corona Viva, features a toothy Mexican San Andres wrapper, spicy Connecticut Stalk Cut Habano binder, and the highest quality filler leaves from Nicaragua and Brazil. The ShadyXX is offered in a 5” x 50 box pressed belicoso, this cigar packs a punch and is packaged in a majestic, gold embossed 10 count petaca.

From the Wynwood Safehouse, Jonathan Drew President and Founder of Drew Estate reminisces, “Eminem, Paul Rosenberg, and Shady Records have changed the world. It’s undeniable!! While selling 230 million records is impressive on its face, it’s the unique way that Shady has connected with so many of us “regular folk” that’s impacted me the greatest. Shady made it okay to be different, no matter how weird or how fucked up we might be. The conceptual space of Shady Records is connected to the Undercrown brand because UC is cut from a different cloth, and not afraid to admit it. THE Undercrown is not the king in this romantic cigar story. The Undercrown’s position is juxtaposed to the king, like a wildin out prince on some DE, homegrown shit. The UC don’t want to be king. He’s deep in the cut, robust, and got mad flavor. I love the connection to Shady Records and am very proud to celebrate 20 years with the dudes.”

Paul Rosenberg, Eminem’s long-time manager and Shady Records’ President, had this to add, “I’m honored to team up with JD and Drew Estate again on our second collaboration resulting in the stellar ShadyXX.  20 years is a huge milestone, and I couldn’t think of a better way to reflect on the label’s legacy and celebrate our achievements than by lighting up another limited edition cigar that we can share with the world. This smoke is a superb, authentic blockbuster and just like one of our classic albums I expect it only to get better with time.”

The Undercrown ShadyXX is packaged in a 10-count petaca with an MSRP of $104.00/petaca. It will be shipping in August with a merchandising solution to Drew Diplomat retailers nationwide.

Shady Records was founded in 1999 by Eminem and his manager Paul Rosenberg as a boutique hip-hop joint venture with Interscope Records.  The first signing to Shady was Eminem’s original group, Detroit rap collective D12, who immediately put the label on the map with the commercial and critical success of their multi-platinum first album, Devil’s Night.  The momentum continued with the release of Music From And Inspired By The Motion Picture 8 Mile, garnering Eminem and Shady Records an Academy Award for Best Original Song with the hit single “Lose Yourself”; a first for a rap song.  The label also partnered with Dr. Dre’s Aftermath Entertainment to sign rap superstar 50 Cent, who over the course of his career has sold more than 30 million albums worldwide.  Shady Records continued its success into the aughts and beyond with successful releases from Obie Trice, D12, Yelawolf, rap supergroup Slaughterhouse and others amassing worldwide sales in excess of 40 million albums.  Shady is currently home to Bad Meets Evil, Eminem’s long-running project with Royce da 5’9”, as well as Compton-bred rapper Boogie and Griselda Records own underground cult heroes Westside Gunn and Conway the Machine.