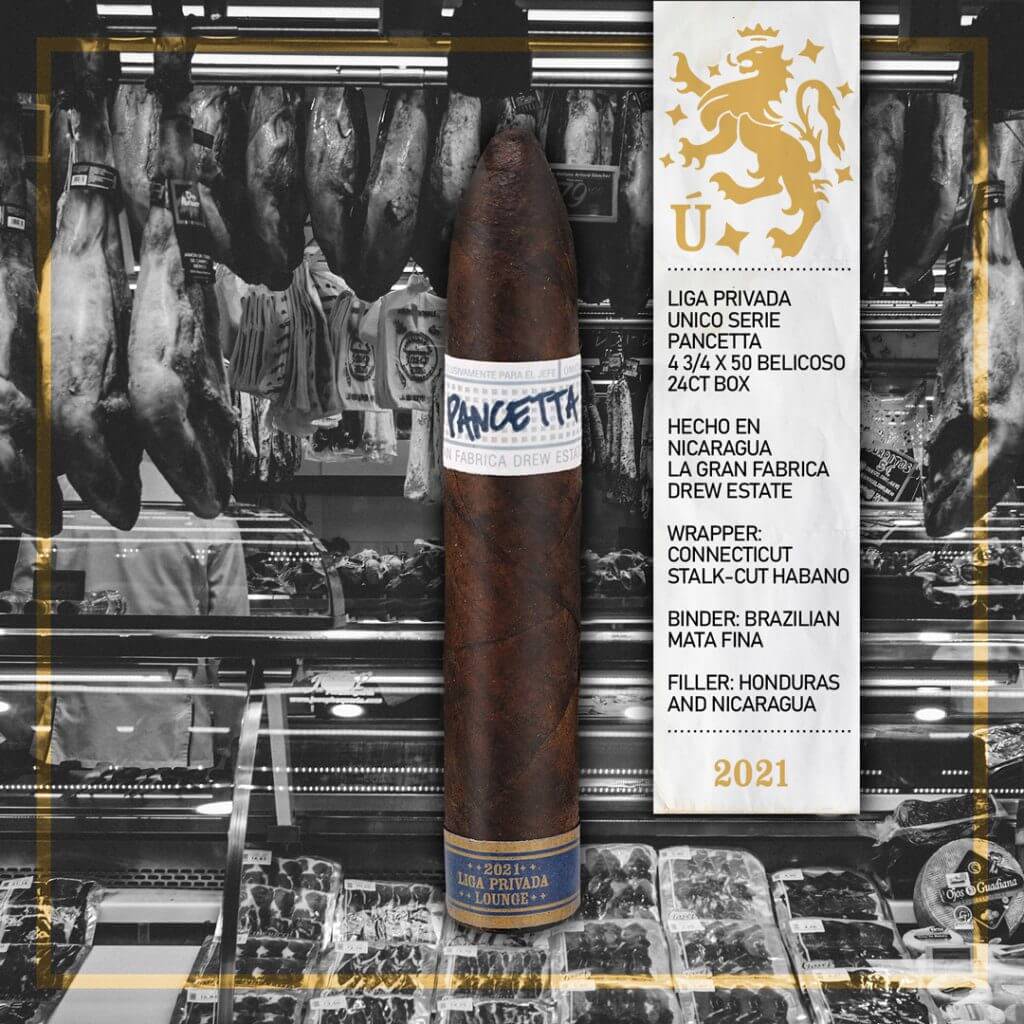 The 2021 edition of Drew Estate’s Liga Privada Unico Serie Pancetta will soon be available exclusively at Wooden Indian Tobacco Shop in Havertown, Pa., and Barrister Cigars in Union, N.J. The cigar will be available at the two retail locations beginning on Oct. 1.

From Sag Harbor, N.Y., Drew Estate’s Founder and President, Jonathan Drew, says, “Two of the first retailers to believe in our vision for Liga Privada and support our story of Stalk-Cut and Stalk-Cured tobaccos from the Connecticut River Valley were our close friends at Wooden Indian and Barrister. Their love and passion for Liga Privada is matched only by the deep, rich, commanding and authoritative presence of this bangin’ cigar.”

“We are proud to bring you the Liga Privada Pancetta for the third annual release,” David Mayer, the owner of Wooden Indian Tobacco Shop, shares. “Thank you to Drew Estate for making this possible and the community for supporting us through this difficult year and a half. #DE4L.”

Barrister Cigars’ owner, David Mallow, adds, “Pancetta is the perfect marriage of the best Liga Privada has to offer. It’s Feral Flying Pig blend with a T52 wrapper in a Short Belicoso size. The boldness of the Feral Flying Pig filler and binder paired with the tastiness of the Stalk-Cut and Stalk-Cured Habano wrapper really shines in the Short Belicoso format. Dave Mayer and I couldn’t be happier with the blend selected for our Liga Privada Lounge Exclusive cigars.”

The Liga Privada Unico Pancetta will be available in 24-count boxes with an MSRP of $299.00/box, or $12.46/cigar. They will be sold exclusively at Wooden Indian Tobacco Shop and Barrister Cigars beginning on Oct. 1. The cigars may be ordered from Wooden Indian Tobacco Shop via its website at woodenindiantobacco.com; or they may be purchased from Barrister Cigars by calling 908-964-3000.

cigars may be ordered from Wooden Indian Tobacco Shop via its website at woodenindiantobacco.com; or they may be purchased from Barrister Cigars by calling 908-964-3000.