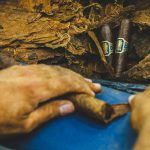 The Story of the Undercrown

Today we will share with you the story of the Drew Estate Undercrown:

In early 2009 we asked our torcedores to smoke less Liga Privada cigars because they were leaving too few to be exported. This request was met with the disappointment you would expect, but rather than being disgruntled they responded by blending their own signature liga.
Incorporating many of the same rare tobaccos, but of different vintages and primings, the cigar they created was no mere replacement. Rather it is an exceptional smoking experience of uncompromising quality and flavor that deserves to be smoked by all.

It is always the master makers who are heralded, but the reality is that great cigars are the product of many talented people, most of whom toil in factories with no publicity ever. They are the uncelebrated heroes who make all of our lives more pleasurable with the cigars they craft. And therefore, it is with great pleasure that we are now sharing their factory floor creation with you as Undercrown, borne of our worker’s ingenuity, resourcefulness and passion for a great cigar.

In 2015, the Undercrown Shade marked the first release blended by Drew Estate Master Blender Willy Herrera not to fall under the Herrera Estelí brand family. Herrera’s continued involvement in blending and brand development within Drew Estate is evident with this blend, as Herrera worked extensively with the Undercrown roller team who blended the original Undercrown line to develop this Connecticut blend.

When asked about the cigar, Willy Herrera stated that, “since day one, Drew Estate has demonstrated that no premium cigar company better understands its team, and that the heart of the company is the production floor and factory. This is why I chose to work closely with the rollers responsible for the original Undercrown blend, and challenged them to create a Connecticut blend that would satisfy my palate. It was a long road, taking more than a year to develop. In the end, it was a very rewarding process, as finding a Connecticut blend to fit my palate wasn’t easy. We finally found a marriage of Drew Estate’s unique tobaccos that we believe is really special.”

The final blend is medium-bodied, lush & ultra-smooth, flavors that only a shade grown wrapper can deliver. And so it is with great bravado that we share “Undercrown Shade”, and the continuing story from our factory floor.

Who knows what will be next in store for the Undercrown, and what will come off the factory floor. Stay tuned