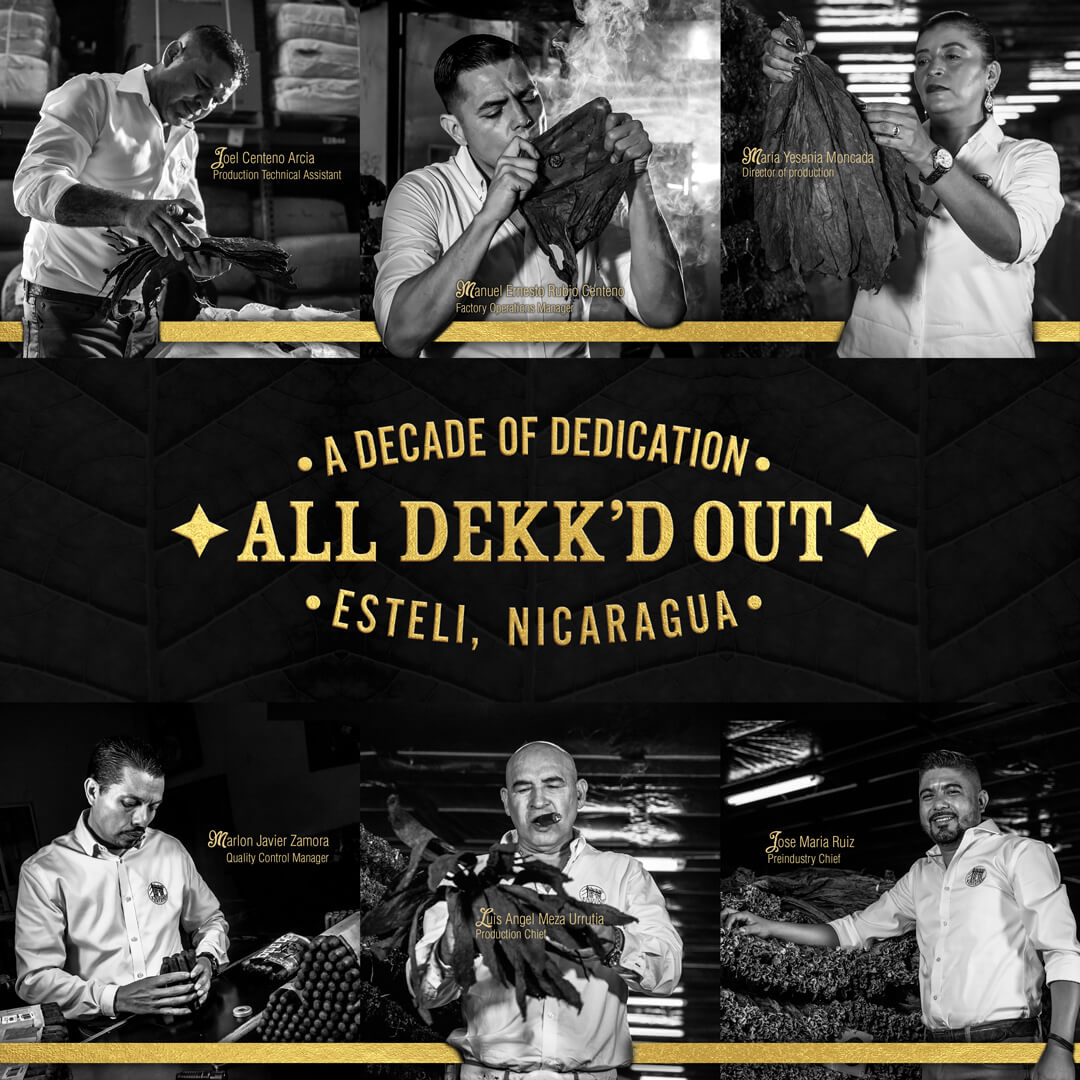 Undercrown 10: A Decade Of Dedication

Since the beginning, Undercrown has been a symbol of the pride, resourcefulness and talent of the Nicaraguan people working at La Gran Fabrica Drew Estate and for the strong bond of mutual affection that they have developed with Drew Estate.

“I felt that bond from the first day that I began working for Drew Estate,” says Pedro Gomez, the factory spokesman for La Gran Fabrica Drew Estate. “There was a culture that existed where there were no barriers. Communication flowed well between everybody and that begins with Jonathan [Drew, Drew Estate’s founder and president]. He was saying hello to everyone and knew everybody’s name and there wasn’t any sort of ego with him. It was clear to me that he cared about Nicaragua and the people working for him and that means a lot to all of us at the factory.”

Open communication and respect for the talented people working at La Gran Fabrica Drew Estate is perhaps the most important factor leading to the birth of the Undercrown brand and the chance for consumers to savor its cigars. The Liga Privada blending team worked diligently to craft a cigar that they could enjoy from the moment they were told to stop smoking Liga Privada. With ample tobacco inventories on hand, they sampled combinations until they hit on a blend that they all liked.

“The entire process took about 18 months,” La Gran Fabrica Drew Estate’s general manager, Manuel Rubio, recalls. “We all wanted to create a new blend to fill that niche missing because we couldn’t smoke Liga Privadas anymore, and we were all involved in the creation of it. We tried different blends to see how the tobaccos worked together. Using the Maduro wrapper was a big challenge too and we had to figure out the best way to work with it to create the perfect cigar. It was exciting for us and we were very proud of the cigar we created.”

So proud, in fact, that they presented the cigar for Jonathan and some of the other members of the company’s executive team to try as Drew Estate looked for potential candidates for a new cigar brand.

“We smoked a bunch of different cigars and none of them wowed us until we came across that one sample for what became Undercrown Maduro,” Drew Estate’s global creative director, Joey Reichenbach recalls. “We were like, ‘Wait a second, what’s this?’ The Mexican San Andres Maduro wrapper was earthy, rich and sweet, and the whole cigar was phenomenal.”

Great cigars are more than just phenomenal smokes—they tell a story one puff at a time. Undercrown gave Drew Estate the perfect opportunity to acknowledge its unsung heroes at the factory and express its gratitude for their toil. When designing Undercrown’s packaging and bands, Drew Estate chose a lion to symbolize the valiant courage of the Nicaraguans working at the factory, and the upside-down crown to represent their noble humility.

“Undercrown is really a story about the humble and valiant prince who someday shall be king,” Jonathan explains. “It’s about the victorious underdog and the people’s champion. It’s about virtue, honor, humility, strength and resolve. It’s the one Drew Estate brand that I most identify with because it’s about the people who work at Drew Estate.”

Judging by the popularity of Undercrown Maduro upon its release, the brand resonated with cigar smokers too. Many bought the brand solely because they identified with Undercrown’s blue-collar, grassroots origin story. Perhaps they fantasized about creating their own cigar brand some day; or maybe they saw themselves as tireless underdogs swinging up at life’s daily battles. Whatever the reason, they gave Undercrown Maduro a try and they came back for more. Undercrown had indeed proved to be the people’s champion.

“Undercrown was the first brand that we released after Liga Privada was introduced,” Jonathan recalls. “We built Undercrown to be a long-term brand. This wasn’t a one-time trial cigar that would disappear or end up in the discount bin. We put everything into it and focused on making it work and cigar smokers were ready for it. The reception for Undercrown was phenomenal.”

Since its initial release, Undercrown has garnered great ratings and numerous awards from the cigar press but it’s been its long-lasting popularity among cigar consumers that attest to its ultimate success in the market. Drew Estate slowly grew Undercrown and waited four years before adding a second expression to the line—Undercrown Shade. Once again, Drew Estate’s blending team, this time working with master blender Willy Herrera, showed its expertise to craft another cigar that captivated the market.

“When I came to Drew Estate, the Undercrown brand and story was already well underway,” Willy comments. “It was about as Nicaraguan a cigar as you could get because it was essentially made by Nicaraguans for Nicaraguans. I challenged the team to create a new Undercrown cigar that kept its Nicaraguan soul but had a more mellow body using Connecticut Shade. We worked together on that project until they developed a blend that hit exactly what I was looking for—a cigar with more body and flavor than most other cigars with Connecticut wrappers.”

Three years later, the Undercrown line grew once again with the addition of Undercrown Sun Grown. The cigar features an Ecuadorean Habano wrapper that adds a touch of spice to the authentically Nicaraguan flavor profile of Undercrown Maduro and Undercrown Shade.

“The Liga Privada blending team has accomplished a lot together to create a brand that’s got all the bases covered,” says Drew Estate brand manager, An Phan. “Within Undercrown you get to experience a lot of different tobaccos and the way they work together to create cigars that are similar but slightly different. Undercrown Maduro is earthy; Undercrown Shade balances that earthiness with the natural creaminess of a Connecticut wrapper. Undercrown Sun Grown adds a slightly zesty flavor profile to the line.”

“One of the key things is when people smoke Undercrown it’s as if they are there on the factory floor with the buncheros and rolleras making a cigar according to what they like to smoke,” Willy says. “This is what the people created for themselves and they get to share it with others. It’s a decade of their dedication to making a great cigar for themselves and for everybody else.”

The dedication that Undercrown signifies is deep and has several layers. It symbolizes Drew Estate’s compassion for its Nicaraguan employees. It represents the loyalty and passionate work ethic those Nicaraguans give back to Drew Estate. Most of all, it epitomizes the enthusiasm, devotion and ardor that the entire Drew Estate team strives to give its consumers and retailers around the globe.

“It was exciting for us that our own creation was going to be taken to the rest of the world,” Manuel concludes. “It shows that Drew Estate is not just one person—it’s a whole team of people working hard together to create something wonderful.”