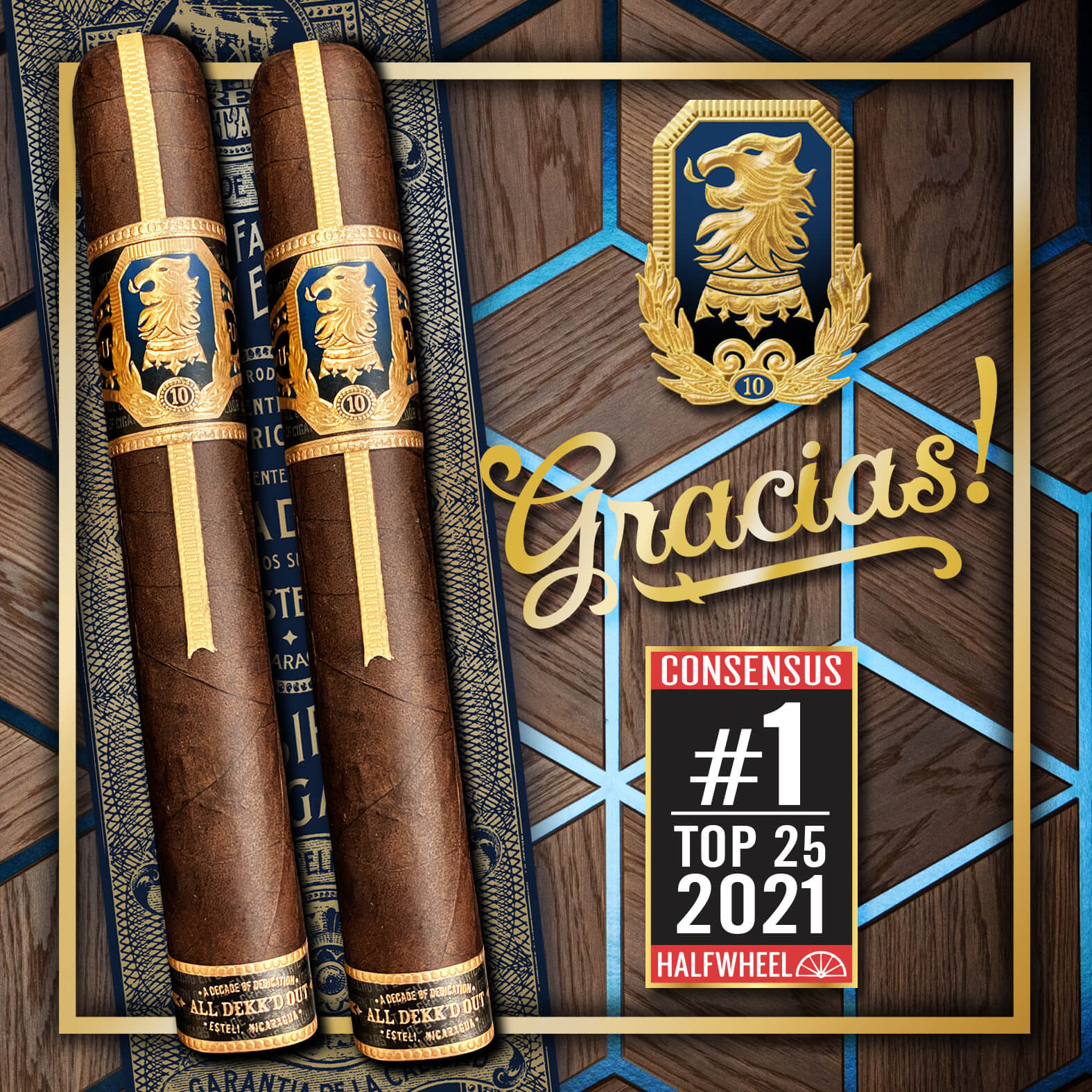 This week, halfwheel.com released their annual compilation of the consensus top 25 cigars of 2021, and the Undercrown 10 earned the honor of being named cigar of the year and Drew Estate as company of the year. The consensus list is built by aggregating the rankings of 45 different cigar publications and reviewers to produce a clear picture of what are the top cigars of the year.

Released to celebrate the brand’s anniversary in 2021, Drew Estate is getting “All Dekked Out,” a tag line that denotes Undercrown 10’s elegant packaging and reinforces the pride of Undercrown’s ten years of excellence. The new, sophisticated packaging is surpassed only by Undercrown 10’s complex, rich and bold blend of ultra-premium aged tobaccos that includes the highest priming of Mexican San Andres dark wrapper, the very finest Broadleaf binder from the Connecticut River Valley, and a tripa blend of select and rare Nicaraguan tobaccos.

Now, the Undercrown 10 was not the only cigar on the list by Drew Estate… Liga Privada Unico Serie Bauhaus came in at #13 and Liga Privada H99 Connecticut Corojo landed at #23.

A European exclusive, the Liga Privada Bauhaus Short Robusto pays extra attention to leaf placement within the cigar, intentionally designed to take our European aficionados through a newly curated experience. Bauhaus is a 114mm x 50 Short Robusto that is wrapped in a rich, earthy Connecticut Broadleaf capa, includes a bold Brazilian binder, and is completed using filler tobaccos from Honduras and Nicaragua. The Liga Privada Unico Serie Bauhaus is packaged in an elegant blue 12-count box with gold embossing.

Finally, the Liga Privada H99 Connecticut Corojo features a Corojo capa from the heart of the Connecticut River Valley, where we grow the mighty leaf that graces Liga Privada with a San Andres Otapan Negro Último Corte capote over a core blend of well-aged Nicaraguan and Honduran tripa leaf. The marked contrast between naturally sweet tobacco spice with dense earthy layers produces a luxuriously rich smoke that fully reveals itself in an epic finish. These cigars can be found at your upcoming Drew Estate events starting in February!

Due to these tremendous rankings in the consensus, Drew Estate was also awarded Company of the Year, the second time it has won this award with the first being in 2013.

In addition to these tremendous rankings by Drew Estate, our partners at Joya de Nicaragua landed at #4 on the Consensus with their newest release Dos Cientos. Dos Cientos is part of Joya de Nicaragua’s Obras Maestras family, which includes Cinco Decadas, Cuatro Cinco and Numero Uno. This one-time release of 2,000 boxes featured a 6 x 54 Gran Toro vitola cigar designed to celebrate the bicentennial anniversary of Central American Independence.

Both Drew Estate and Joya de Nicaragua would like to thank halfwheel and the collective cigar media for bestowing such an honor on us, we truly value and appreciate your hard work.