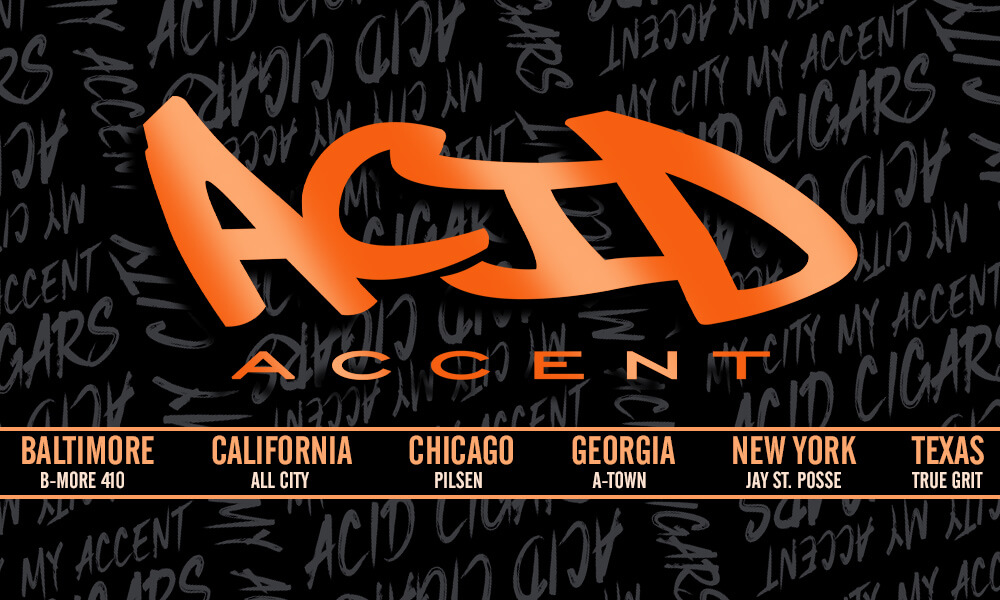 Drew Estate announces today the expansion of the ACID Accents program to new regions including California, Chicago area, Georgia and Texas. The ACID Accents program provides Drew Diplomat retailers with a regionally exclusive cigar. The first two Acid Accents, the Jay St. Posse for the NYC Area and the B-More 410 for Maryland, were showcased at the 2019 IPCPR trade show held in Las Vegas, NV.

Today’s expanded lineup includes the California Exclusive, All-City, a 5 ½” x 52 robusto wrapped in a lush Indonesian capa combined with an unique ACID infusion. All City is a term used in graffiti to show that your art can be seen everywhere, and the ACID All City will be seen throughout the entire state of California. Next up, we have the ACID Pilsen, named after the eclectic and comsopolitan Art district in Chicago’s lower west side, featuring an infusion with a creamy Ecuadorian Connecticut wrapper in a 5 13/16” x 54 toro vitola. For our Southern ACID fans, we have the ACID A-Town for all of Georgia. This cigar showcases a bright Indonesian wrapper, with a pleasing infusion and room note, in a 6” x 50 toro vitola. Finally, since everything is bigger in Texas, we present the ACID True Grit, a 6” x 60 gordito wrapped in a silky Ecuadorian Connecticut wrapper and featuring a BOLD infusion. All that’s missing is the 10-gallon hat.

From the Wynwood Safehouse, Jonathan Drew Founder and President of Drew Estate adds, “Now with regional exclusives that highlight dynamic local markets, ACID’s global scale is brought front and center to your street corner, your hood, your bario, your geitoniά (that’s Greek for Ike and our other Greek peoples out there) and all sorts of spots, uptown to down, BK to MD and beyond meat.”

The ACID Accents program includes the following cigars, and all are shipping to retailers on October 23rd: